Please ensure Javascript is enabled for purposes of website accessibility
Log In Help Join The Motley Fool
Free Article Join Over 1 Million Premium Members And Get More In-Depth Stock Guidance and Research
By Jeremy Bowman – Nov 4, 2018 at 9:31AM

When it comes to sales per square foot, marijuana shops are crushing the rest of retail.

Marijuana stocks have captivated investors over the past year as legalization in Canada and a number of tie-ups with more established companies have helped legitimize the long-illegal drug.

Cannabis stocks have largely faded since Canadian legalization on Oct. 17, a sign that the sector may be in a bubble, while some investors believe that the product is essentially a commodity that doesn't offer enough opportunity for differentiation.

In spite of those concerns, there is one popular metric that bears may be ignoring that shows just how attractive the marijuana opportunity is: sales per square foot. 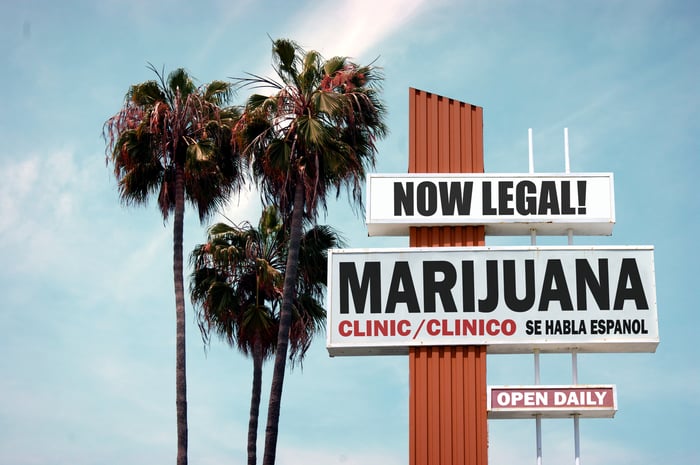 How retailers measure up

In the retail industry, there is no more important metric for measuring the popularity of a product or concept than sales per square foot, or the annual revenue a retailer generates from its real estate. Sales per square foot shows how efficiently a retailer uses its space, which is an especially important sign of success these days as the traditional store model is being disrupted by e-commerce.

It may surprise some readers that marijuana shops, or dispensaries, are crushing the retail industry in sales per square foot.

According to Costar, a commercial real estate research firm, the average retailer generates just $325 in annual revenue per square foot, down from $375 in the early 2000s.

The research firm found last year that Apple (AAPL 1.07%) was tops in sales per square foot for all companies with $5,546, thanks to its relatively small store count and popularity of its high-end gadgets like the iPhone. Tiffany (TIF), the luxury jeweler, leads its segment with $2,951 in sales per square foot, due to the high price of jewelry, and Lululemon Athletica (LULU 2.20%), the high-end yoga clothier, ranks No. 1 in apparel retailers with $1,560 sales per square foot.

All three of those companies are highly profitable with profit margins in the double digits, have strong brands, and are well regarded by the general public.

However, MedMen Enterprises (MMNFF 1.41%), an upscale cannabis retailer based in California that has been described as the "Apple store of pot," posted sales per square foot of $6,257 at its California stores in its most recent quarter. In other words, its stores are busier than any other mainstream retailer in the country. MedMen, which is focused on the U.S. market, now has 67 stores across 12 states, factoring in its acquisition of Pharmacann, and $39.8 million in revenue last year on more than 700,000 sales transactions, meaning its average sales transaction is around $50.

What it means for the future of pot

Perhaps more importantly, though, the high sales-per-square-foot figures in the pot industry make those stores highly desirable for malls and other commercial landlords looking to drive traffic. Businesses like Apple stores and Whole Foods are sought after by commercial real estate developers because they generate high sales volumes and bring in high-end customers. A chain like MedMen could do the same for shopping centers, especially as malls are increasingly left with vacancies as companies like Sears go bankrupt.

Marijuana investors should be aware that high sales per square foot don't necessarily correlate into profits. MedMen posted a wide loss in its most recent fiscal year at negative $112.3 million; general and administrative expenses ballooned to $98.2 million as the company invests in expansion and prepares to integrate Pharmacann after the recent acquisition. However, at a store level, the company has a gross margin of 33%, indicating that the stores themselves are a profitable business model.

No one knows where MedMen itself is headed, as the company will eventually have to overcome those wide losses, but the sales-per-square-foot figures make one thing clear.

There is enormous pent-up demand for cannabis products, and that should continue to drive the industry's expansion and a further push for legalization both in other states and on a federal level. With booming sales per square foot, it's easy to see how the marijuana market in the U.S. could eventually reach $100 billion or more.