Please ensure Javascript is enabled for purposes of website accessibility
Log In Help Join The Motley Fool
Free Article Join Over 1 Million Premium Members And Get More In-Depth Stock Guidance and Research
By Tyler Crowe – Nov 4, 2018 at 11:40AM

Instead of blowing away investors with production growth, the Big Oil giant increases its profits by utilizing the entire oil and gas value chain.

The investment case for ExxonMobil (XOM -0.20%) has always been one that focuses on the very long term. Most of the time, that can come at the detriment of short-term results. That had certainly been the case so far in 2018, as the company produced lackluster results. This past quarter, though, some of the things ExxonMobil has been working on over the past several years started to materialize and led to a much better-than-expected earnings result.

Let's look at what the company did this past quarter to go from routinely disappointing earnings results to a pleasantly surprising quarter, and what it means for investors from here on out.

After several consecutive quarters that probably left investors with headaches from smashing their heads on their keyboards, this past quarter's result was a breath of fresh air. Even though the company's production numbers won't wow anyone, Exxon grew production in the right places with higher output of oil and less North American natural gas, which has been a real drag on profitability. As a result, the company benefited immensely from higher price realizations on its oil production and turned its U.S. upstream earnings into a significant profit center instead of a drag on earnings.

What was equally impressive was the company's downstream and chemical segments, which were able to capture value from oil price discrepancies both in the U.S. and Europe. The only reason its chemical earnings were down was because of major scheduled downtime at its Singapore chemical complex. 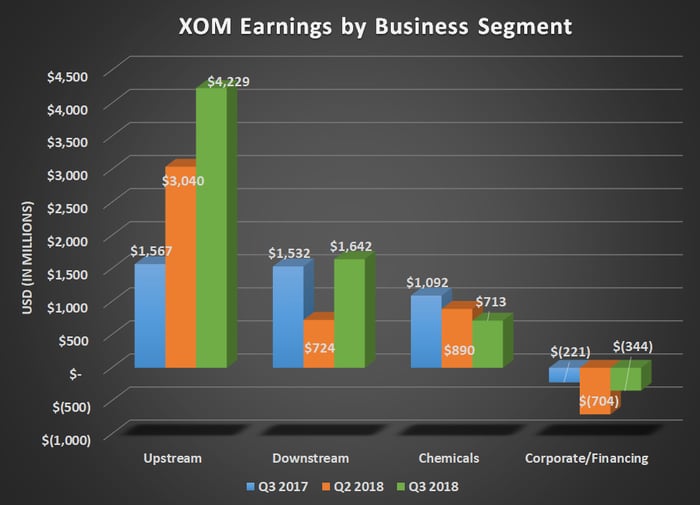 The overarching theme for this past quarter was the benefits of integration and the ability to squeeze more profit out of each barrel. On the quarterly conference call, Jack Williams, senior vice president of chemicals and downstream, highlighted how its logistics, refining, and chemical production is generating a lot of value from its production in the Permian Basin.

[...] Year to date with the actual environment we're seeing, we've made well over $1.2 billion across this value chain. And it's clear from the current environment, highlighting the value of our approach in the Permian. 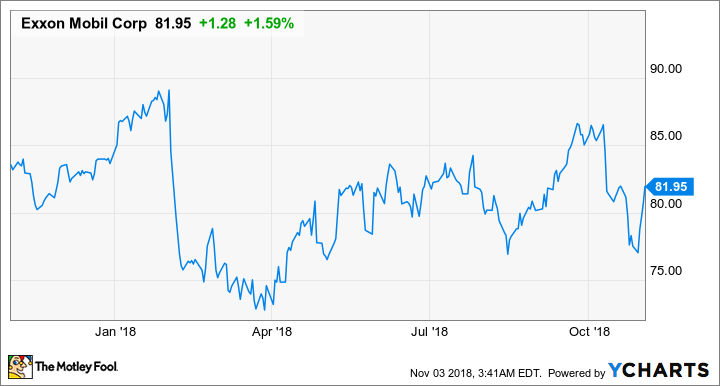 A prelude for things to come?

One of the most frustrating things about Exxon's results over the past few quarters has been declining production. While other Big Oil companies were growing production at eye-popping rates, Exxon's was slowly dwindling from a combination of project timing, natural field decline, and a deliberate winding down of U.S. natural gas production.

This past quarter, though, the company proved that it doesn't have to grow production at a high rate to generate loads of cash. The focus on getting the most value out of every barrel produced through logistics, refining, and processing is very much a reflection of the mindset of CEO Darren Woods, who spent decades on the downstream side of the business.

It's still going to take a long time for some of ExxonMobil's largest and most profitable projects -- Guyana, Mozambique LNG, and Brazil -- to start operations, so investors today should still have their eyes on 2021-2025 as these production sources go live. In the meantime, the company has a way to generate ample profits that will make its quarterly results much less frustrating than the past few.