Please ensure Javascript is enabled for purposes of website accessibility
Log In Help Join The Motley Fool
Free Article Join Over 1 Million Premium Members And Get More In-Depth Stock Guidance and Research
By Beth McKenna – Nov 4, 2018 at 7:02AM

The biotech company's stock continued its upward climb that began in September when it released very positive results of a cardiovascular outcomes study of its drug derived from fish oil.

Shares of Amarin (AMRN -2.68%), an Irish biotech company, jumped 28% in October, according to data from S&P Global Market Intelligence. For context, the S&P 500 declined 6.8% last month.

We can attribute Amarin stock's October performance to a continuation of its huge upward move that began in September, as the chart below shows. The catalyst was the company's release on Sept. 24 of very positive results of a cardiovascular outcomes study of Vascepa, its omega-3 fatty acid drug derived from fish oil.

As I previously wrote:

The study showed that Vascepa (which received Food and Drug Administration approval in 2016 as a treatment for high triglyceride levels) reduced the risk of major adverse cardiovascular events by 25% in patients already taking statin drugs compared to those receiving a placebo, which is a highly statistically significant result. Armed with this strong trial result, Amarin "should now have little trouble getting Vascepa's label expansion approved in the United States," according to [my colleague George Budwell]. He noted that Amarin could potentially generate "up to a staggering $2 billion in sales with a broader label that includes patients with persistently high triglycerides despite being on statin therapy." 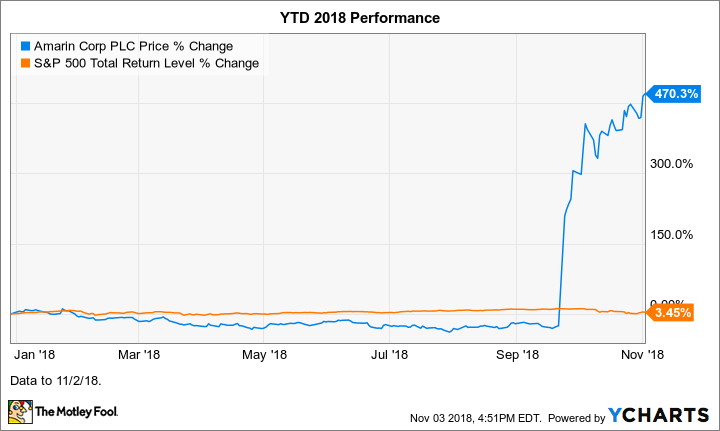 Investors should expect material news on Nov. 10, as that's when Amarin plans to release additional details from the study at the 2018 Scientific Sessions of the American Heart Association in Chicago.

Amarin stock could make a sizable move either up or down depending on the details released. If they confirm the top-line results released last month and don't have any negative surprises, the stock could shoot higher. Shares, however, could tumble if the additional data shows that the cardiovascular study's results weren't as robust as suggested by the initial data release.