Please ensure Javascript is enabled for purposes of website accessibility
Log In Help Join The Motley Fool
Free Article Join Over 1 Million Premium Members And Get More In-Depth Stock Guidance and Research
By Ashraf Eassa – Nov 5, 2018 at 9:00AM

Apple will soon begin selling a version of its 15-inch MacBook Pro with higher-end graphics.

On July 12, Apple (AAPL 0.45%) announced updated versions of its high-end MacBook Pro computers with significantly improved internals. The systems incorporate faster processors -- Apple claimed a 70% boost on the 15-inch model and a doubling in performance for the 13-inch variant -- as well as support for greater memory (32 GB of DRAM from a 16 GB maximum in the prior model). The systems also incorporate Apple's T2 companion chip as well as True Tone display technology.

In the 13-inch models, Apple uses the Iris Plus graphics that are integrated inside of the Intel processors, but for the 15-inch systems, Apple uses discrete graphics processors from Advanced Micro Devices (AMD). The versions that Apple announced back in July -- and the ones that are available for sale -- can currently be configured with AMD's Radeon Pro 555X graphics or a higher-end version known as Radeon Pro 560X. These are both based on the company's older, lower-end Polaris architecture. 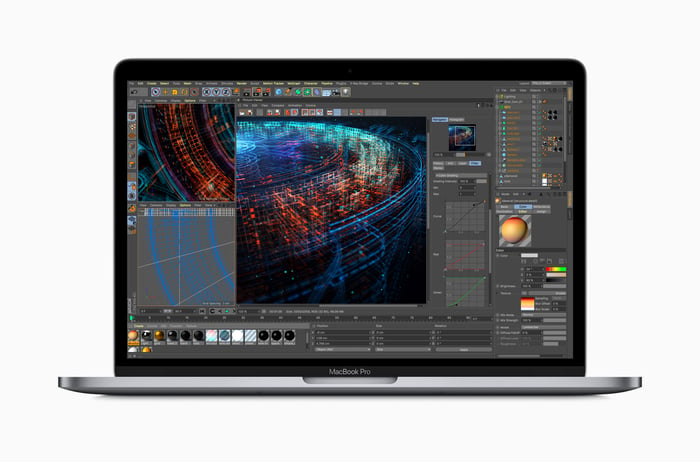 Let's go over what this means for both Apple and AMD.

A win for both

To the extent that it can sell more expensive systems, Apple's Mac-related revenue and, presumably, profit stand to benefit.

The $2,399 model can only be configured with up to the Radeon Pro 560X, which means that anybody who wants to get their hands on a Radeon Pro Vega-based MacBook Pro will also have to buy a system that fundamentally starts at a higher price. That's a clear win for Apple.

Putting it all into context

Apple offering higher-end configurations of its MacBook Pro with AMD's Radeon Pro Vega graphics chips is a nice way for Apple and AMD to sell pricier systems and graphics chips, respectively, but this isn't a game changer for either company.

Ultimately, this announcement isn't something that should have a meaningful impact on the investment theses around either Apple or AMD.