Emergent BioSolutions (EBS -2.71%) saw earnings per share fall year over year in the third quarter, but given the nature of the company's lumpy sales, the fall doesn't appear to be anything to worry about. Looking at the year-to-date numbers, EPS for the vaccines and bioterrorism-response company are up 25% over the same period last year. 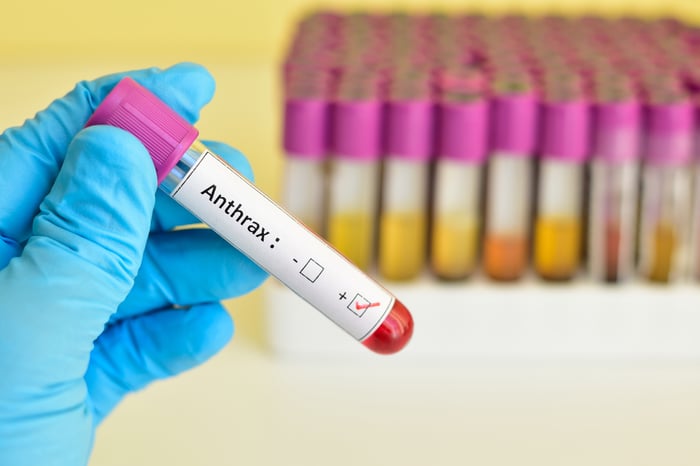 There are other opioid overdose drugs in development, but CEO Daniel Abdun-Nabi thinks there's plenty of room for multiple products in the growing market:

And as we look at the landscape, increased education, increased awareness, increased avenues for availability, this is a growing marketplace. It's not static and fixed. And particularly when we see some of the state initiatives and the federal government allocating grant money for block grants to the states, and the utilization of those funds by the states to address the opioid crisis in the way they see fit. This is an expanding market. So it's not static whereby an additional product or two coming into the market actually affects the growth prospects for the Narcan nasal spray.

Emergent had to take on debt to finance the acquisitions, but CFO Richard Lindahl noted the company still has plenty of flexibility: "To finance these transactions, we incurred $768 million of debt under our concurrently amended and restated credit facility and also used $190 million of cash on hand. After factoring in this activity, we now have over $280 million of undrawn capacity under our expanded revolver, which when combined with our cash flow profile, ensures we retain the financial flexibility to fund our operating and investment needs, service our debt, and opportunistically consider additional [mergers and acquisitions] as we move down the road."

With the addition of PaxVax and Adapt Pharma and solid performance so far this year, management increased revenue guidance to between $770 million and $800 million, up from previous guidance of $715 million to $755 million. Guidance for net income was adjusted down, but that's to be expected with transaction and integration costs. On an adjusted basis, management is now looking for net income in the $105 million to $115 million range.