Let's sift through the wreckage of Western Digital’s earnings report.

Western Digital (WDC -4.25%) stock plunged 18% on Oct. 26, the day after its first-quarter earnings report. The swoon added insult to injury for investors, who had already seen the company's stock fall a stunning 50% from its 52-week highs, set just in May.

The cause? It's all about NAND flash prices, which are falling harder and faster than most expected -- including Western Digital management. When NAND prices fall, not only does Western Digital lose profits on NAND, but lower-priced NAND also begins to displace hard disk drives -- Western Digital's other business.

Due to the worsening environment, management guided for adjusted earnings per share to be cut in half next quarter, to roughly $1.45-$1.65 per share, down from last quarter's $3.04. They admitted to limited visibility after that. On the last earnings call, management had said the market was overreacting to recent weakness in memory pricing. So how did they end up being so wrong? 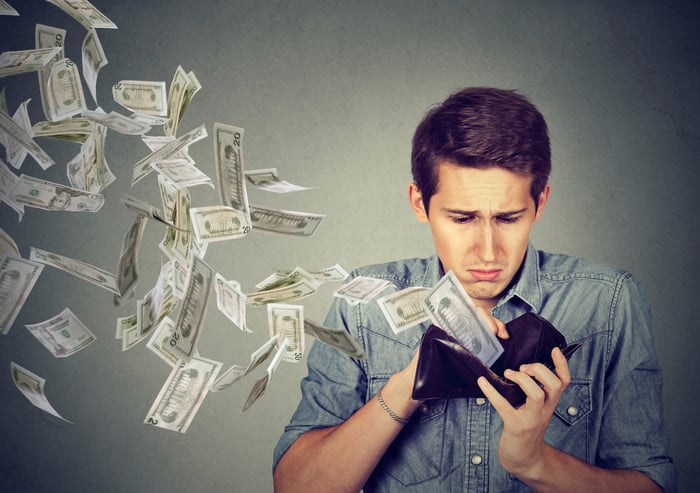 The expected plunge in EPS is rooted in the escalating trade war with China and continued interest rate hikes by the Fed. Concerns about these two things have prompted enterprise customers across the world to put off orders. This phenomenon was previously voiced by chipmaker Texas Instruments. The caution seems to have spread even to the cloud industry, which has huge growth prospects and was thought to be somewhat immune to the cycle.

Cracks in the clouds?

According to management, the capacity enterprise segment -- which is mostly cloud data center storage products -- will grow exabytes 55% in 2018, well above the long-term estimated growth rate of 40%.

Then industry exabyte shipments are expected to decelerate over the next one or two quarters, before reaccelerating in the second half of 2019.

Western Digital now projects exabyte shipments to grow only 36% to 38% in 2019, with much of that back-end loaded. Bit growth of 36% to 38% is still pretty good, of course, but when you've invested to grow production 40% to 45% and demand growth suddenly drops to around zero for a quarter or two, it can be a problem.

Making matters worse, NAND flash producers have begun producing "3D" NAND, which stacks memory modules on top of each other. As the industry is progressing from 32-layer NAND to 64-layer NAND, it essentially doubles bit growth per wafer, leading to a flood of supply all at once.

Taking Western Digital as an example, the company shipped 28% more NAND Flash exabytes last quarter -- not year over year, but quarter over quarter. Yet despite the surge in production, Western Digital's NAND revenue only grew 7.2%, as average selling prices plummeted by 16%, causing NAND gross margin to fall from 51% to 44%.

Keep in mind: This was only last quarter. Prices are now expected to fall even further over the next six months, setting up a situation where Western Digital's earnings will continue to fall.

What management is doing

Western Digital is reacting in a prudent way and cutting capacity. Next year, the company aims to cut wafer starts by 10% to 15%, but will still grow supply as the company continues its 64-layer and 96-layer NAND migrations. That should put 2019 output roughly in line with the new expectations for industry demand.

In addition, thanks to the company's variable compensation expense policy for both R&D and SG&A (with compensation moving up or down with revenue), management also forecasts lower operating expenses next quarter of $760 million to $780 million, down from $820 million last quarter.

The way forward is murky

Investors are now faced with a difficult choice: to ride out the ensuing downturn, or cut bait. Keep in mind that the seeds of the next boom are often sown in downturns, as low prices stimulate demand, and supply capacity is cut.

In addition, each successive "layer" of 3D NAND delivers less bit growth than the one before it. For instance, 96-layer increases bits 50% over 64-layer, as opposed to the 100% increase from 32-layer to 64-layer. I happen to think Western Digital's sell-off is a bit overdone, though I also thought that in late summer, when the stock was in the low $60s.

If you're newly interested in the space, I'd first look at companies that produce both DRAM and NAND. The DRAM industry only has three large players and should be more stable, as opposed to the NAND industry, with its seven participants.

Still, if we assume that the long-term industry forecast for exploding data growth and storage remains intact, the NAND market should rebound eventually, though it may take a while. And we're now in tax-loss selling season, which means investors may be looking to sell their big losers before the end of the year. Given that, I wouldn't expect a rebound for Western Digital in the near-term.