Please ensure Javascript is enabled for purposes of website accessibility
Log In Help Join The Motley Fool
Free Article Join Over 1 Million Premium Members And Get More In-Depth Stock Guidance and Research
By Matthew DiLallo – Nov 7, 2018 at 11:18AM

Rising oil prices are fueling demand for pipeline space, as well as other logistics capability to move crude from the wellhead to high-demand market centers. That plays right into the hands of oil pipeline giant Plains All American Pipeline (PAA -0.97%), as well as its parent Plains GP Holdings (PAGP -0.92%), which benefited from those improving market conditions in the third quarter.

Plains All American Pipeline delivered significantly higher earnings and cash flow during the third quarter, which came in ahead of its expectations. Fueling the company's growth was a substantial improvement from its supply and logistics segment: 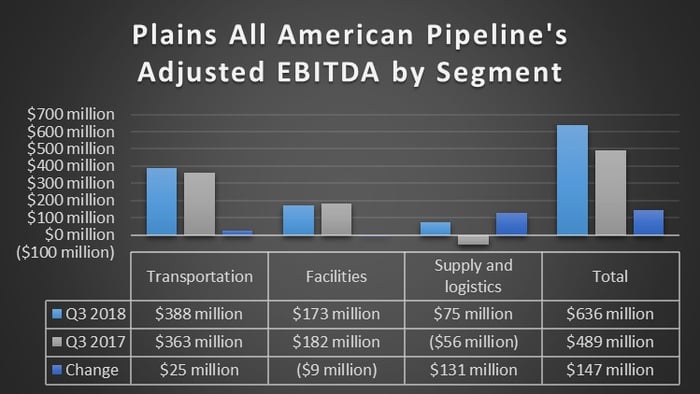 Supply and logistics went from a trouble spot to a profit center in the third quarter. The company noted that it was able to exploit regional differences in oil prices by moving crude from lower-priced areas to premium markets. The company also gathered higher volumes of oil from wells and earned higher margins on this activity.

Meanwhile, Plains' transportation business also performed well in the quarter, as earnings rose 7% year over year. Driving that increase was higher volumes on its Permian Basin systems and the start-up of the Diamond Pipeline. That helped more than offset the lost income from assets sold in both the Rocky Mountain and Central region in the past year. Without those sales, transportation earnings would have increased 12% year over year.

The lone weak spot was the company's facilities segment where earnings declined 5% from last year's third quarter. The main culprit was assets sales. However, even after adjusting for that impact, facilities earnings would have still slipped 1% year over year as recent expansion projects, higher volumes at its Cushing and St. James storage terminals, and increased activity at its rail terminals couldn't offset weakness elsewhere. 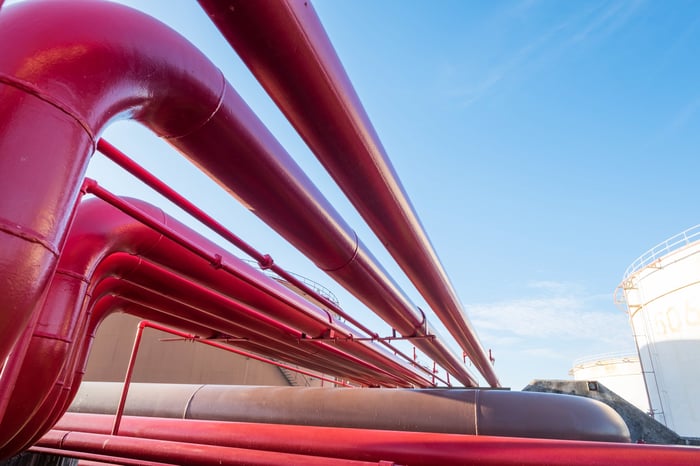 Plains' stronger-than-expected performance in the third quarter, along with positive industry fundamentals, led it to boost its full-year guidance once again. The company now expects adjusted EBITDA of $2.55 billion for the year, up from $2.4 billion, a 22.5% increase from 2017. Meanwhile, it sees DCF hitting $1.68 billion, up from $1.555 billion, which would be 28.5% higher than last year. The company also provided a preliminary glimpse at 2019, anticipating that adjusted EBITDA will rise another 10% to around $2.8 billion.

That strong earnings growth will come even though Plains and partner Magellan Midstream Partners (MMP -0.72%) closed a sale of a 50% stake in their BridgeTex pipeline right after the quarter ended. Plains received $862 million for the 30% interest it sold, while Magellan Midstream received $575 million for the 20% stake it sold. Plains All American intends on using those proceeds to pay off debt, while Magellan will use them to fund expansion projects.

The BridgeTex sale gets Plains All American Pipelines another step closer to achieving its leverage reduction plan, which it expects to complete during the first half of next year. Once it does, the company will be in position to start growing its 5.1% yielding distribution to investors. That increasing payout is also likely to enable Plains GP Holdings to start raising its dividend once again unless the two companies get swept up in the industry's current consolidation wave.

The momentum is shifting

Plains All American Pipelines' financial results improved dramatically in the third quarter, which sets it up for an even stronger year. Meanwhile, the company sees more growth coming down the pipeline in 2019. Add that earnings growth to an improving balance sheet and a growing pipeline of additional expansion projects, and Plains All American Pipelines' future looks bright.