Investors will have to keep waiting to see whether the gourmet burger chain's efforts to reinvigorate its business will pay off.

Gourmet burger chain Red Robin (RRGB -1.19%) has had a tough run recently, as revenue, earnings per share, comparable restaurant sales, and guest counts have all been in decline. While the company has been taking action to address underlying problems by making efforts to improve marketing messaging and service execution at peak demand hours, management has said it will take time for these initiatives to begin bearing fruit.

Sure enough, Red Robin's third-quarter results remained unimpressive, so investors will have to keep waiting to see whether the company's efforts to reinvigorate its business will pay off in Q4 and beyond. 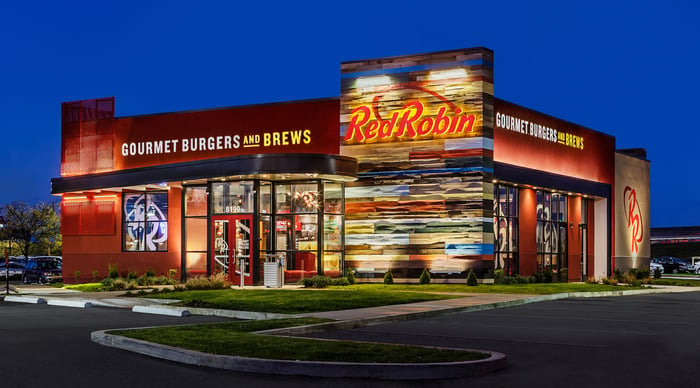 "Our third quarter sales performance was the result of a decline in dine-in traffic, which we expected when we chose mid quarter to shift remaining media weight to later in the year," said Red Robin CEO Denny Marie Post in the company's third-quarter earnings release. In addition, Post said the company started retraining all of its restaurant teams for improved peak-hour service during the last part of the third quarter.

Post noted that the company is "already seeing improvements in ticket and wait times" as a result of its retraining efforts.

Red Robin is hopeful its business can return to growth, but there's still uncertainty about the timing of this turnaround.

"By refreshing our marketing plans and improving service execution, we firmly believe we can get back to where we all want and need to be, although how long that will take is not entirely clear," Post said during the company's third-quarter earnings call. "As it stands, we do not expect to see meaningful same-store sales trend improvement in Q4 over Q3."