The company is adding customers at a healthy clip and building out strong international sales.

Data analytics platform company Alteryx Inc. (AYX -2.51%) reported its third-quarter results on Wednesday, with revenue spiking 59% from the year-ago quarter to $54.2 million. The company's non-GAAP net income in the third quarter was $5.3 million, or $0.08 per share, up from $1.2 million in the third quarter 2017.

Alteryx moved further toward GAAP profitability in the quarter, with a net income loss of just $0.2 million, up from a loss of $3.3 million in the year-ago quarter. 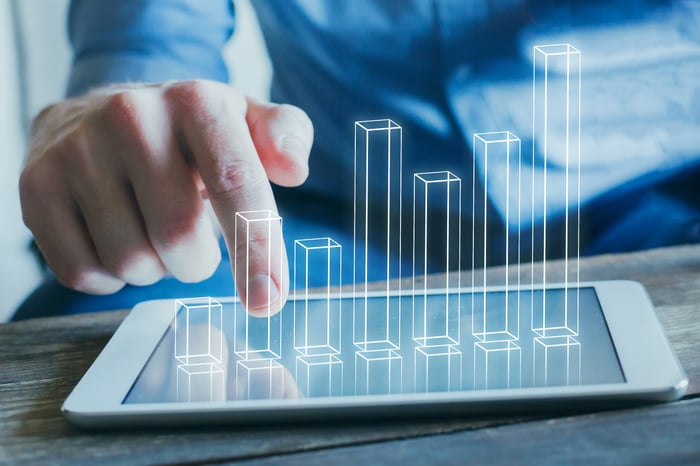 Management spent some time on the earnings conference call highlighting the expansion of Alteryx's customer base and noted that its international customers are growing along with domestic ones.

Dean Stoecker, Alteryx's CEO, said on the call, "We also continue to see strong demand outside of North America, as evidenced by a near doubling of our international revenues in Q3 and did business in more than 70 countries."

Alteryx's management also noted that while gross margins in the quarter improved to 90.5%, they could soon slide as the company invests in its support and professional services.

Management also raised its full-year revenue guidance and now expects GAAP revenue will be in the range of $200.5 million to $201.5 million, which represents year-over-year growth of about 52% to 53%. While sales are expected to spike, Alteryx's earnings will still be in the red with an expected loss per share between $0.03 and $0.05.

Stoecker said at the end of the call that, "As we head into Q4 and 2019, we remain focused on building a business that we believe will have continued strong revenue growth and long-term sustainable profitability."