Growth on one hand, but declines on the other. 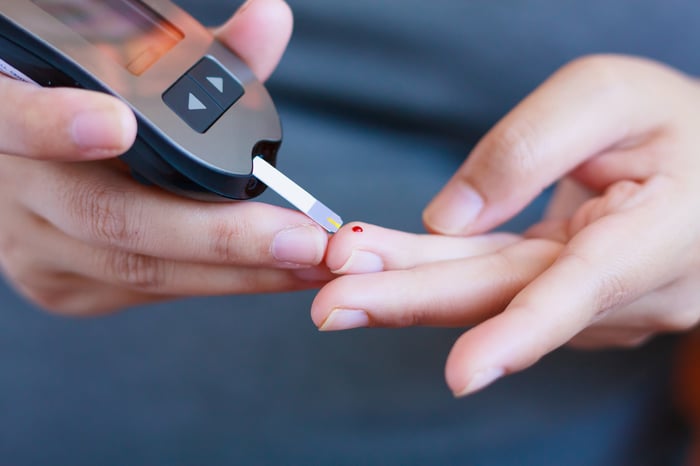 Eli Lilly (LLY -1.27%) has a drug in the same class as Victoza and Saxenda, and, like Novo, Eli Lilly is working on follow-on molecules, but Novo CEO Lars Fruergaard Jorgensen doesn't seem worried:

I think what drives the value of the segment is continued innovation and we have seen that until now that for each and every time we have seen a new launch of efficacious GLP-1 agent, we have seen a larger market growth. So the overall value of the market will be benefiting from two companies competing with similar tactics, and say the short- to medium-term tactics are still in favor of Nordisk. And then we are quite confident that we can also, in terms of our next-generation product, do something that's competitive vis-a-vis Lilly.

Novo also has a next-next-generation molecule in the class, dubbed 2023, which is an oral version, with higher efficiency, so it could be used in other diseases such as nonalcoholic steatohepatitis (NASH), as Novo's chief scientific officer Mads Krogsgaard Thomsen explained:

So what analogue 2023 enables is one of two things: either higher efficacy, implying that it could be developed for obesity, could be developed for NASH, could be developed for high efficacy in type 2 diabetes; or you can match oral sema as we know today, and that would lead to a reduction in the cost of goods sold. And all of that we'll know a lot more about next spring when we report the data both from this trial and from the second-generation oral semaglutide tablet formulation. They're reporting approximately at the same time.

Looking further ahead, it'll continue to be a balancing act with Ozempic (and eventually the oral version of the drug) driving sales, while Novo Nordisk tries to keep sales of older medications from slipping. Management noted that it doesn't expect much next year in the way of changes in access -- insurers playing hardball refusing to cover the drugs because Novo won't compete on price -- but that could be because Novo Nordisk made price concessions, so revenue will go down even if volumes remain constant.