The news is pretty bad, but it's probably baked into the stock price already.

Shareholders of Party City (PRTY 7.79%) stock are holding a pity party after reporting earnings today -- down 6.6% as of noon EST. Analysts had been expecting the party supplies retailer/wholesaler to report pro forma profits of $0.17 per share for its fiscal Q3 on $591.8 million in sales. 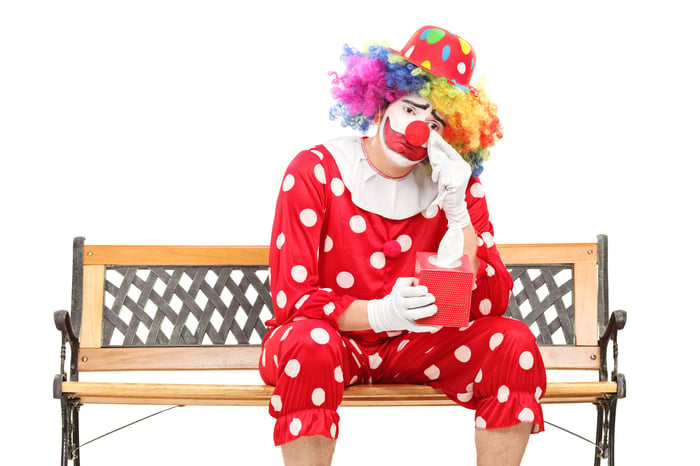 There's not much joy at Party City today -- and there could be even less once the effects of tax reform begin to wane. Image source: Getty Images.

Party City management blamed "temporary operational disruptions, increased inflationary pressures associated with distribution costs and helium shortages and slightly lower sales than expected" for the earnings miss. Sales declined 1.3% year over year, and earnings -- well, as already mentioned, there weren't any earnings this quarter aside from pro forma ones.

Revising its guidance for the year in light of the weak performance in the third quarter, Party City now projects it will end fiscal 2018 with about $2.45 billion in sales and GAAP earnings of somewhere between $1.22 and $1.27 per share (mostly "earned" as a result of tax benefits from tax reform). Assuming this is indeed how things work out, the fact that Party City has lost money in a couple of quarters this year won't prevent the company from still reporting a sizable profit for the year as a whole.

Granted, its profit won't quite measure up to the $1.82 that Party City earned last year, but it still leaves the stock trading at an enticingly low P/E ratio of 7.5 times likely 2018 earnings. My guess is it's this seemingly cheap valuation that explains why the stock is not down even more than it has already fallen.

Whether the company can hold onto that valuation in the absence of additional help from Congress and the IRS in future years remains to be seen.