Please ensure Javascript is enabled for purposes of website accessibility
Log In Help Join The Motley Fool
Free Article Join Over 1 Million Premium Members And Get More In-Depth Stock Guidance and Research
By Dan Caplinger – Nov 9, 2018 at 7:19AM

The marijuana stock has a lot to prove.

The cannabis stock revolution has continued to inspire investors to look closely at the marijuana space, and despite recent volatility, many of those who follow the industry continue to seek smart investments with exposure to cannabis. Cronos Group (CRON 0.00%) was one of the first marijuana stocks to trade on a major U.S. exchange, but it also has a chip on its shoulder because of the larger scope of some of its biggest rivals in the Canadian cannabis space.

Cronos expects to release its third-quarter financial report on Nov. 13, and investors are already expecting that the marijuana company will dramatically grow from year-ago levels. Yet the bigger question is whether it will grow fast enough to catch up with some of its major competition. You can expect answers on Tuesday, but here's an early look at what you should be ready to see from Cronos in its quarterly report. 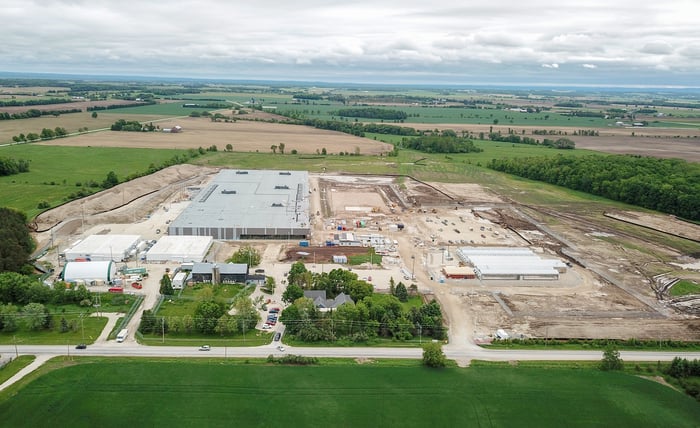 Cronos has done a good job over the past year of ramping up its revenue. The fastest growth came in the first quarter of 2018, when sales soared more than 80% compared to the fourth quarter of 2017. Yet by contrast, expectations for the third quarter are relatively modest, with anticipated sales representing a troublingly slow 5% growth rate.

Cronos Group's second-quarter financial report back in August drummed up considerable optimism about the cannabis company's future. Not only has Cronos built up sales but it's also focused on the best niches of the cannabis market, including sales of cannabis oils that tend to get much higher profit-margin levels than dried cannabis. The company also took steps to prepare for its future, including raising cash, announcing plans to build a new production facility in the Canadian province of Ontario, and forging relationships overseas that could greatly expand Cronos' international business.

CEO Mike Gorenstein laid out Cronos Group's strategy in very simple terms. As Gorenstein put it, Cronos is focused on four strategic priorities: building capacity in a capital-efficient manner, creating a smart distribution infrastructure, establishing valuable intellectual property to differentiate itself from commodity players in the cannabis industry, and promoting brands that will resonate with customers and produce loyalty in the long run. The CEO is convinced that, regardless of how many analysts are paying attention to supply agreements in determining market share, the real test will be for Cronos to offer high-quality products that allow the company to interact favorably with its customer base.

What to really look at

The biggest challenge for investors looking at Cronos Group's third-quarter results is that they won't include the most important event for the company: the legalization of recreational cannabis sales in the Canadian market. Those numbers won't show up until Cronos releases fourth-quarter results early next year and they're likely to be huge. Currently, expectations are for revenue to approach the CA$10 million mark in the fourth quarter, almost tripling since mid-2018.

Therefore, the most important things for shareholders to concentrate on when Cronos releases its latest results are the comments that management makes about the early going in the fourth quarter. If the rollout of cannabis in Canada has gone well, then it should lead to optimistic comments in the conference call from Cronos executives. Anything less than perfect candor could indicate a more sluggish start to Canadian cannabis sales than investors would like.

Also, the September announcement that Cronos will work with Ginkgo Bioworks to produce cultured cannabinoids has huge implications for the company's future. Extracting cannabis oils is costly and time-consuming, but Cronos hopes that working with Ginkgo could lead to development of a more cost-effective production method that will give it a competitive advantage. The partnership came at a cost, as Ginkgo will be eligible to receive Cronos stock upon meeting certain milestones.

Finally, investors have hoped that Cronos would be able to attract a major consumer-products company as a partner in the same way that marijuana rival Canopy Growth did. So far, no suitors have come up, and that has many investors concerned that Cronos stock might be trading at unsustainable levels based solely on its current business fundamentals.

Cronos shares have been all over the map, more than doubling from mid-August to mid-September, only to give up most of those gains by the end of October before rebounding. It's hard to tie stock prices to business performance in a rapidly growing industry, but smart investors will want to look closely at everything going on in Cronos Group's financials before committing their hard-earned money to the cannabis company. Only with great execution will Cronos be able to catch up with some of its larger rivals in the marijuana industry.