Investors seemed concerned by declining revenue per customer, but that needs to be put into context.

Expectations were high going into HubSpot's (HUBS 5.33%) third-quarter financial report. The inbound marketing and sales specialist has consistently beat analysts' consensus estimates and its own forecasts, and subsequently raised its full-year guidance. Investors were hoping that HubSpot would continue its practice of "beat and raise."

HubSpot reported revenue of $131.8 million, sailing past consensus estimates and the high end of management's forecast, which both topped out around $126.6 million. Adjusted diluted earnings per share (EPS) of $0.17 were also much higher than the $0.05 many expected. 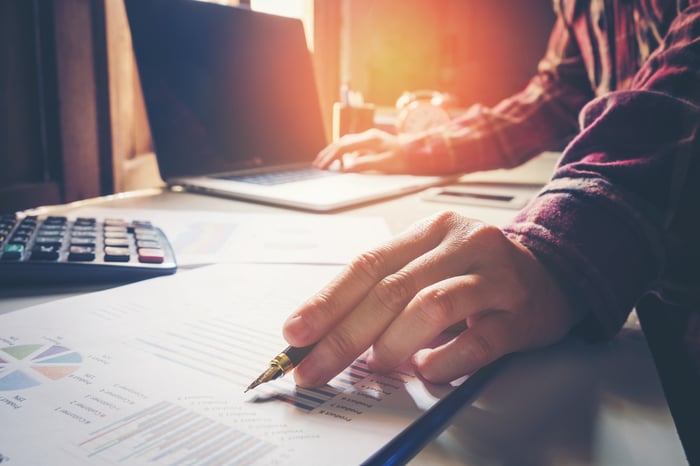 Both segments of HubSpot's business contributed to the top-line gains. Subscription revenue grew to $125.5 million, an increase of 35% year over year, while professional services and other revenue increased to $6.3 million, up 39% compared to the prior-year quarter.

HubSpot continues to invest heavily in research and development as well as sales and marketing, which expanded by 63% and 23% year over year, respectively.

HubSpot's total customer base grew to 52,505, up 40% year over year. The total average subscription revenue per customer (ASRPC) fell to $9,959, a decline of 4% year over year and essentially flat with the second quarter. The culprit was the company's recently relaunched starter products, which are designed to be attractively priced for new customers. This has resulted in significant growth for HubSpot but has consequently pressured ASRPC. The company's flagship products, Marketing Hub and Sales Hub, both continue to produce strong year-over-year growth.

HubSpot continues to offer a growing array of platform choices for customers, and the move to offer multiple hubs is also paying off. While multi-product customers previously accounted for just 20% of revenue, that has increased to more than 40% -- and HubSpot still sees additional room for growth.

"HubSpot delivered another strong quarter with total revenue growth of 35% and a 4-point improvement in non-GAAP operating margins versus last year," said Brian Halligan, co-founder and CEO. "We've invested heavily in our platform to capitalize on the massive opportunity in the mid-market. I'm excited about the strength we're seeing across the business and we're well positioned to continue to grow with our customers for years to come."

As has been its practice, HubSpot again increased its full-year guidance on the strength of its just-reported quarter. The company is now forecasting full-year revenue of about $506 million, an increase of 35% compared to the prior year, resulting in adjusted EPS of $0.81.

For the upcoming fourth quarter, management is guiding for revenue of $137 million at the midpoint, which would represent year-over-year growth of 29%. This would translate to adjusted EPS of about $0.30.

Investors may be focusing on the somewhat lighter growth forecast. They may also be concerned by HubSpot's lower revenue per customer, but that's a necessary component of increasing the company's customer base. As long as HubSpot keeps its relentless focus on continuing to attract new customers and developing innovative platforms, the company will prosper -- as will investors.