Shares of Flex (NASDAQ:FLEX) fell 40.1% in October 2018, according to data from S&P Global Market Intelligence. The manufacturing specialist formerly known as Flextronics reported mixed second-quarter results with a side of weak guidance for the year-ending period. The market reaction was swift and terrible, as Flex shares plunged 32% lower the next day.

In the second quarter, Flex saw both sales and earnings rise 7% year over year. Revenue landed at $6.71 billion, just below the Street's $6.79 billion consensus, while earnings squeaked by the analyst view by a penny to $0.029 per share.

Looking ahead, Flextronics set its third-quarter earnings guidance at roughly $0.31 per share while aiming its revenues for that period at approximately $6.8 billion -- a 15% year-over-year revenue drop. The consensus analyst view for that quarter had been calling for earnings of $0.36 per share on sales near $7.3 billion. Full-year revenue guidance also fell far short of the then-current Street view.

On top of that, Flex announced the end of an effort to make shoes for Nike (NYSE:NKE) in Guadalajara, Mexico, because Flex couldn't find a way to make that operation "commercially viable." 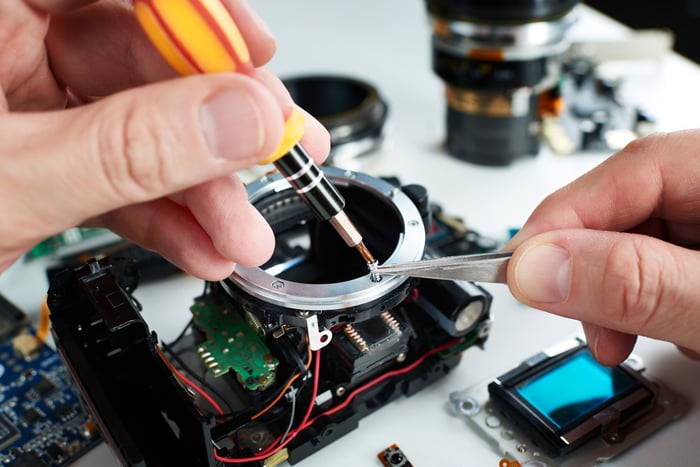 The main reason behind Flex's soft revenue guidance lies in limited manufacturing capacity in India. The company is investing heavily in Indian facilities in order to capture a unique wave of demand for products made in India, to be sold in the local market. The government there recently slapped import tariffs on many types of goods in an effort to encourage local production for the local market. However, Flex is having trouble getting additional capacity off the ground quickly enough to serve the rising order volumes and is thus leaving plenty of Indian business unserved.

Management hopes to get the Indian situation under control by the end of this fiscal year, meaning the middle of calendar year 2019. It's no surprise to see Flex investors taking a big step back in the face of these lingering capacity issues.