The low-cost gym operator stretches its streak of positive comps to 47 quarters, hitting new highs in the process.

Investors are used to strong quarterly outings at Planet Fitness, and they've been rewarded handsomely in the process. The stock is trading 59% higher in 2018. Planet Fitness shares have risen by at least 46% in each of its first three full years as a public company, more than tripling since going public at $16 in the summer of 2015.

Planet Fitness is obviously doing a lot of things right. Let's review a few of the ways the low-cost fitness center is nailing its reps to the enrichment of its shareholders. 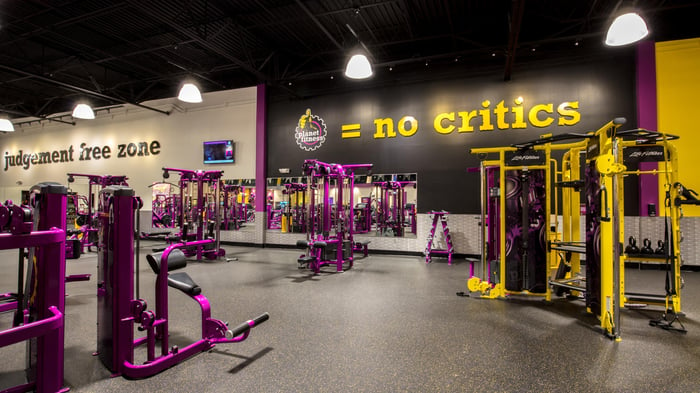 1. One of the industry's best streaks stretches to 47

A common myth is that a gym's clientele is fickle and cyclical. Demand for access to workout gear comes and goes, and even when the going is good, it's possible for folks to choose trendy fitness platforms. Planet Fitness debunks the myth. It has seen its popularity grow at the unit level, consistently, for nearly a dozen years.

Growth is not the lone handiwork of Planet Fitness' blistering comps. Revenue shot 40% higher in its latest quarter, clocking in at a record $136.7 million. This is the gym operator's headiest top-line growth in more than four years.

Expansion is the biggest reason for the big pop. Planet Fitness has grown its empire from 1,432 locations to 1,646 over the past year. The sharp 9.7% ascent in comps is just the cherry on top.

Planet Fitness' growth is starting to accelerate again. Revenue growth was decelerating in each of the three previous years, but that will change in 2018. The company sees revenue rising 33% for all of 2018.

3. The ceiling is still far away

The case for the upside at Planet Fitness is that the concept is not limited to hardcore workout junkies. Planet Fitness sets members back as little as $10 and only as much as $20 a month, which explains why it's been able to grow to more than 12.2 million members. It crossed the 10 million-member mark just early last year. Joining a Planet Fitness is not a bank-breaking decision.

Planet Fitness has ramped up to 1,646 units in short order, but it hasn't even hit half as many fitness centers as it hopes to open. The goal here is 4,000 units, and by then it expects have enhanced its money-making potential through in-store initiatives and brand partnerships. In short, as good as things have been for investors since its 2015 IPO, there are still more than a few reps to go before this workout is complete.

Why Planet Fitness Stock Got a Lift Today
411%