Don't count on improvement in the U.S. legal environment for the cannabis industry with a new attorney general.

It's not always a great thing to get what you wished for.

The marijuana industry has looked forward to Jeff Sessions stepping down as U.S. attorney general ever since he was named to the position by President Trump. Their wish came true last week: Trump asked for and received Sessions' resignation. The immediate reaction by marijuana stocks was tremendous -- even for Canadian marijuana stocks like Canopy Growth (CGC -7.01%) and Tilray (TLRY) that weren't really impacted all that much by Sessions' departure.

But the celebrations could be short lived. The names of the potential candidates to replace Jeff Sessions have begun to leak out to the press. Based on the list of picks that have been identified, the new attorney general could prove to marijuana stocks that the grass isn't always greener on the other side. Here are five top candidates Trump is reportedly considering and the stance of each on marijuana. 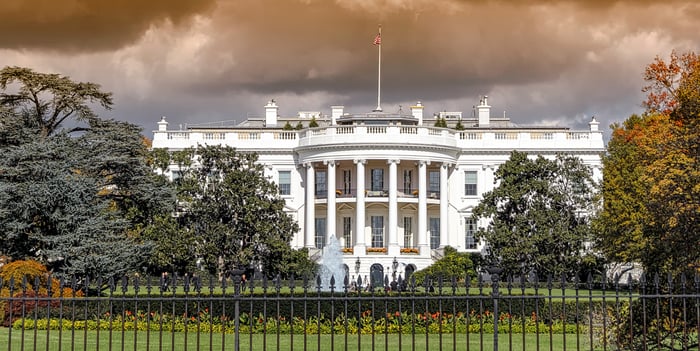 Several sources have included current Secretary of Health and Human Services (HHS) Alex Azar as a possible replacement for Jeff Sessions. Azar's background includes serving as a clerk for former Supreme Court Justice Antonin Scalia, serving as general counsel and deputy secretary of HHS during the George W. Bush administration, and working as an executive with Eli Lilly.

Azar doesn't sound like a proponent of relaxing marijuana laws. In March, he stated that "there really is no such thing as medical marijuana." He added: "There is no FDA approved use of marijuana, a botanical plant. I just want to be very clear about that." His comment came before the FDA approved GW Pharmaceuticals' Epidiolex, a cannabidiol (CBD) product made from marijuana, for treating two rare forms of epilepsy.

After a circuit judge ruled that Florida's ban on smoking medical marijuana was unconstitutional, Bondi's office filed a 57-page document supporting the ban. The Florida attorney general's office also argued against the circuit court decision before an appeals court. However, Bondi did issue an emergency rule on Nov. 1, 2018, to clear the way for patients in Florida to obtain Epidiolex.

Former New Jersey governor Chris Christie has been a close advisor to President Trump for several years and has expressed interest in the U.S. attorney general position in the past. Christie could now be a leading contender to replace Jeff Sessions.

While he was governor of New Jersey, Christie stated that supporters of marijuana legalization wanted to "poison our kids" and referred to potential tax revenue stemming from sales of legalized marijuana as "blood money." During his 2016 presidential campaign, he promised to crack down on states that had violated federal laws by legalizing marijuana. However, Christie recently stated that "states have the right to do what they want to do" on marijuana.

Another famous advisor to President Trump who was interested in being named U.S. attorney general two years ago could be in the running. Former New York City mayor Rudy Giuliani has been listed by multiple news organizations as a potential Trump favorite to head the U.S. Department of Justice.

As mayor of New York City, Giuliani took a hard-line approach on marijuana, directing the police to make arrests for possession of small amounts of the drug. He has also fervently opposed the legalization of marijuana, including medical marijuana, in the past.

NBC News has reported that Rep. John Ratcliffe (R.-Texas) is another potential front-runner to replace Jeff Sessions. Ratcliffe previously served as U.S. attorney of the Eastern District of Texas.

Ratcliffe cosponsored the Charlotte's Web Medical Access Act that would have exempted CBD from federal marijuana prohibitions. However, he has voted against all other major marijuana reform legislation so far in his congressional career.

How much does it matter?

There are other potential candidates to fill the U.S. attorney general slot as well. The big question for marijuana stocks is: Does it really matter who Trump picks?

For Canadian marijuana stocks like Canopy Growth and Tilray, the answer to that question really is "no." These companies don't operate in the U.S. and won't until federal marijuana laws are changed. The U.S. attorney general can't change those laws.

But what about for U.S. marijuana businesses? Jeff Sessions' replacement will determine how aggressively the Department of Justice will prosecute current federal marijuana laws. Sessions chose to rescind Obama-era policies that kept the DOJ from intervening in states that had legalized marijuana.

However, it's important to remember that President Trump himself has indicated a willingness to support legislation that would leave marijuana laws to the individual states. It doesn't seem likely that the new attorney general, regardless of who it is, would oppose Trump in this area. He or she is likely to walk a tightrope on another front -- the ongoing Mueller investigation -- and probably would be eager to be in alignment with the president in other areas.

In the big scheme of things, the next U.S. attorney general might impact marijuana stocks less than expected by many. But it's entirely possible that the current precarious environment for the U.S. cannabis industry put into place by Jeff Sessions won't get any better for a while to come.