The smart-speaker maker needs to prove it hears what the market is saying.

The promise of the home smart-speaker market should benefit premium speaker maker Sonos (SONO 0.14%), but its third-quarter earnings report -- its first as a public company -- was not well received in September, and the competitive pressure from industry leader Amazon.com, as well as Apple and Alphabet's Google, has investors worried its fiscal fourth-quarter earnings will get a lousy reception as well.

The financial report will be released after the market closes on Thursday, Nov. 15, so let's take a look at six key areas investors should be watching. 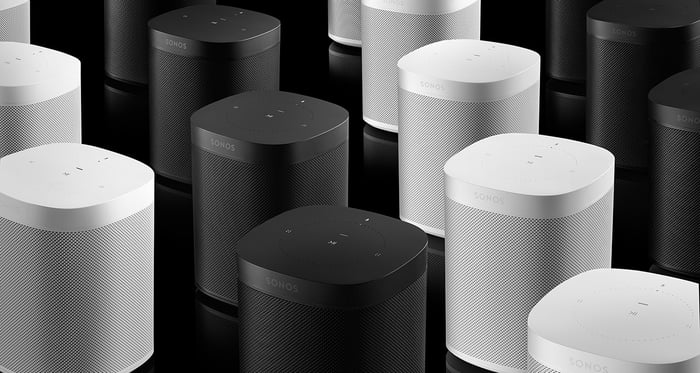 Analysts are looking for $249 million in revenue from Sonos, a 16% increase over the $214 million it generated a year ago.

That would suggest a lot of sales of its $199 Alexa-enabled Sonos One speakers, which debuted in the fiscal second quarter of 2018 and quickly supplanted sales of the pricey ($699) Playbase that pulled double duty by also serving as a television stand. Despite selling 25% more wireless speaker products last quarter, revenue fell 6.6% due to the tilt toward the cheaper device.

Sonos is still producing losses, and Wall Street expects the smart-speaker maker to continue that trend, recording a $0.06-per-share loss, though that's a marked improvement over the $0.45-per-share loss notched in the third quarter.

Sonos speakers had previously been sold primarily through third-party retailers, but direct-to-consumer sales will become the primary focus of Sonos going forward. And with good reason: CEO Patrick Spence says direct sales account for about 12% of year-to-date revenue, up from 10% last year, but the margins they produce tend to be about 10 percentage points better than through third parties. Last year it hired away from Nike Matthew Siegel to serve as chief commercial officer and focus primarily on increasing direct sales.

Wireless speakers are the largest segment of Sonos' business, accounting for 45% of total sales compared with 32% for home theater speakers. (Components represented another 20%.) As sales of the Sonos One grow and the Playbase fall, expect to see that disparity widen.

Not just a premium player anymore

Where Sonos used to be thought of as primarily a premium speaker maker, the introductions of the Sonos One and the Beam soundbar put a Sonos foot in the entry-level market. Yet that serves to dramatically lower average selling prices, which hurt revenue last quarter, though that doesn't mean that's the direction Sonos is heading. Last quarter it also introduced the Sonos Amp 2, which costs $599, and Sonos says you'll now find its products regularly between the $150 and $700 price points.

As noted previously, Sonos is facing stiff competition from Amazon, Apple, and Google, which offer products all across the price continuum. Hampering Sonos' ability to gain traction, however, will be the delay in having its speakers be compatible with Google Assistant until sometime next year. Because it is testing the feature in only a few hundred homes at the moment before expanding to just a few thousand, such enabled speakers are not expected to be on the market for a while.

The market hasn't been kind to Sonos thus far, with its shares currently trading about 15% below its $16 IPO price. There's no reason to think the fourth quarter will be any better for the speaker maker until it can prove that the devices it is bringing to market are ones the market wants and can effectively compete against its larger, better-financed rivals.