The e-commerce veteran has partnered with three big service providers in an effort to keep up with Amazon, Best Buy, and others.

Retailers are increasingly trying to become one-stop shops for their customers, offering not just products but also all the services associated with them. Best Buy (BBY -0.06%) and Amazon (AMZN 2.10%), for example, will sell you a television, a video doorbell, or nearly any other home electronics device, and offer you setup or installation services for an additional fee.

Now, eBay (EBAY 0.47%) has jumped into that game by partnering with service providers Handy, Porch, and InstallerNet. Shoppers on the digital platform will now be able to seamlessly book services including installation or assembly when they check out with an item that would require either.

"A massive amount of home and electronic items are sold on eBay daily, many of which require professional installation," said Merchandising Vice President Alyssa Steele in a press release. "With these new partnerships, we're able to combine our incredible selection of inventory with easy access to affordable and trusted service professionals." 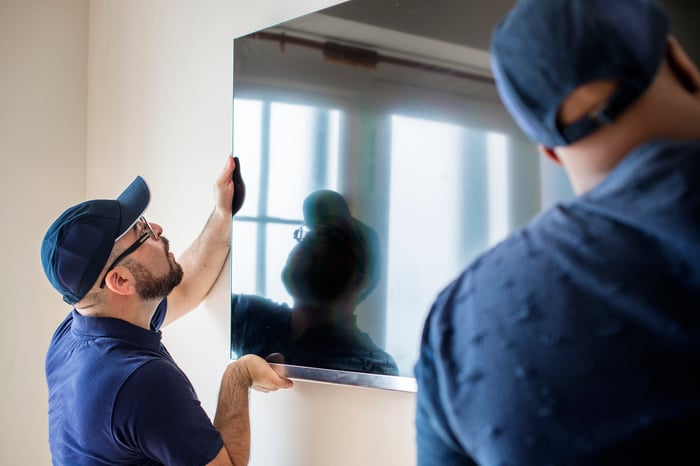 Why is eBay doing this?

Essentially, eBay is jumping into the service segment in an attempt to keep up with two of its closest digital rivals. It's also adding services that distinguish it from some traditional brick-an-mortar-based chains that lack them. This strategy is likely just as much about making customers comfortable so it can capture sales as it is about tacking on incremental revenue from setup or installation.

Competing in retail has become a game of convenience. Amazon's two-day shipping through Prime has compelled its biggest rivals to offer similar deals (in many cases for free). And in their quest to differentiate themselves -- or just keep up -- major chains including Wal-Mart and Target have added new pickup, delivery, return, and checkout options.

Offering installation and assembly services at checkout removes a pain point for customers. They don't have to worry about doing it themselves or having to find a local pro. It also provides some extra peace of mind, as Handy, Porch, and InstallerNet (like similar services offered by Amazon and Best Buy) screen their service people, so consumers know they're getting a qualified professional.

Consumers know the eBay brand, and that gives credibility to the service providers it has partnered with. The only risk here is that a service person will do a bad job, and eBay has mitigated that by partnering with established players rather than building out its own network.

These deals should win eBay some business that might have gone to Amazon or Best Buy. It probably won't be too big an additive number, but in terms of preventing potential loss of sales, this deal could be significant.

The table stakes to compete in retail keep going up; at this point, offering more services has nearly become a requirement. This deal at least keeps eBay on par with two of its biggest rivals while giving it an edge over players that don't offer as much of a full-service experience.