Apple's (NASDAQ:AAPL) iPhone XR -- a device that incorporates many of the elements of the company's premium iPhone XS and iPhone XS Max in a lower-cost package -- might not be doing well as some had hoped it would.

Ming-Chi Kuo, a respected analyst with TF International Securities who had previously been optimistic about the iPhone XR, recently came out and slashed his estimate for how many Apple will ship between the fourth quarter of 2018 through the third quarter of 2019 from 100 million units to just 70 million units. 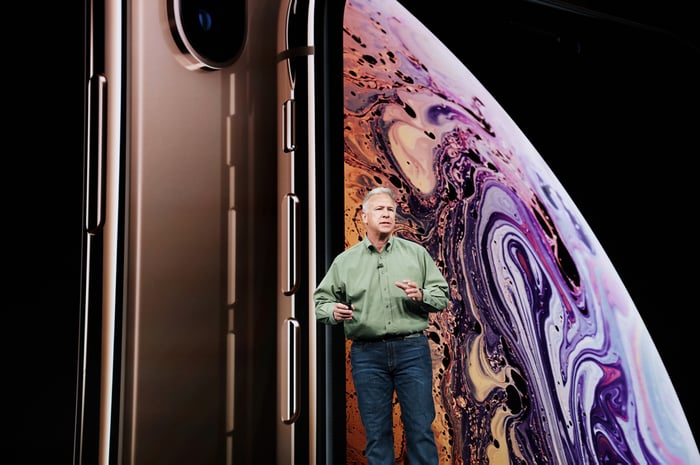 He gave three reasons for his estimate cut. Let's take a closer look at them.

Trade war, what is it good for?

The first reason that Kuo cited was "negative impacts on consumer confidence from the trade war, especially in the Chinese market."

The Chinese market is an important one for Apple. Indeed, during its fiscal 2018, the company reported generating $51.94 billion in revenue from the "Greater China" region, making up almost 19.6% of its total sales for the year.

The next issue that Kuo cites is "expectations from more uses for more affordable XR or the dual-camera and narrower bezel design to be provided at the current price level."

Put another way, Kuo seems to be arguing that the iPhone XR as-is doesn't provide a good enough value for the money because it has slightly thicker bezels than the ones found on the iPhone XS and iPhone XS Max (as well as many Android devices) and has only a single-lens rear-facing camera.

Apple's pricier iPhone XS and iPhone XS Max devices incorporate dual-lens rear-facing cameras, something that's undoubtedly due to those devices' higher selling prices (creating additional room in the bill of materials for a pricier two-lens system), as well as Apple's desire to segment the product lines (the two-lens system on the higher-end models is a selling point).

If Apple decides that it'd be best off bringing a two-lens rear-facing camera to next year's iPhone XR, then there are a couple of ways it can do so while still affording the higher-end successors to the iPhone XS and iPhone XS Max some points of differentiation.

Alternatively, Apple could give the successors to the iPhone XS and iPhone XS Max triple-lens rear-facing cameras (this has been rumored in the past), which would allow the company to give the next iPhone XR a dual-lens camera while still having an easily marketable point of camera differentiation in the higher-end models.

Finally, Kuo cited "competition from Huawei's Mate 20 series" as a factor that led him to reduce iPhone XR shipment estimates. Huawei has been growing its smartphone shipments at a rapid clip.

In the second quarter of 2018, for example, IDC said that Huawei had shipped more smartphones than Apple did, making it the world's second-largest smartphone vendor by market share. IDC's data for the third quarter also showed Huawei in second place by unit shipments, ahead of Apple.

Huawei, however, sells smartphones at a much wider range of price points than Apple does, so the unit share picture doesn't tell anywhere close to the whole story from a financial perspective.

Nevertheless, if Kuo is right, Huawei's efforts in the higher end of the smartphone market are negatively impacting demand for the iPhone XR.