Samsung (NASDAQOTH: SSNLF) is the world's largest smartphone maker by unit share, nabbing 21.7% of the market in 2017, according to the International Data Corporation. The company is also a major manufacturer of the key components that go into smartphones such as DRAM, NAND flash, camera sensors, and even applications processors. 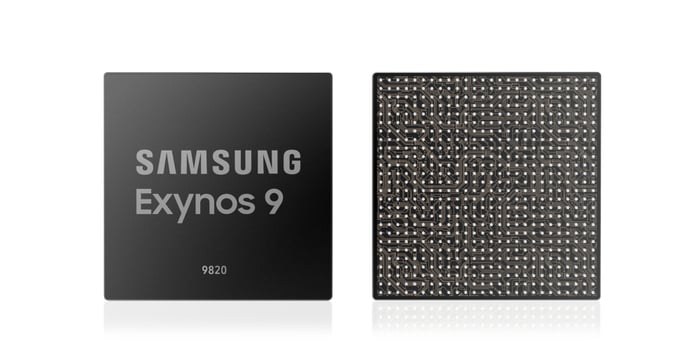 Indeed, Samsung not only operates its own chip manufacturing operations -- it builds chips for both itself and on a contract basis for others -- but it also designs its own applications processors for a range of its own devices. The company's flagship Galaxy S-series and Note-series smartphones, for example, come in variants powered by Samsung-designed processors. Those processors are sold under Samsung's Exynos brand.

On Nov. 14, Samsung announced the next member of its Exynos family of applications processors and the chip that'll surely power a portion of the company's Galaxy S10 and next Galaxy Note smartphones over the next year: Exynos 9820. Here's what you need to know about it.

Samsung says the Exynos 9820 has a new, custom-designed CPU core that "delivers around 20% improvement in single core performance or 40% in power efficiency compared to its predecessors which can load data or switch between apps much faster."

Multi-core performance, the company says, is up "by around 15%."

The Exynos 9820 features two of those custom CPUs, two of Arm Holdings Cortex A75 cores, and four of Arm's low-power Cortex-A55 cores, for a total of 10 cores.

And finally, the Exynos 9820 has a cellular modem that's capable of 2 gigabits-per-second download speeds.

The manufacturing technology and timetable

The 8nm LPP, Samsung explains, "reduces power consumption by up to 10% compared to the 10nm LPP process."

In other words, it looks as if the big performance and efficiency increases of the Exynos 9820 come largely from design enhancements rather than from the change in manufacturing technology.

The company claims that this chip should be in mass production by the end of 2018, which is the right timeline for a chip that's expected to power its upcoming flagship Galaxy S10 smartphones in the first half of 2019.