Please ensure Javascript is enabled for purposes of website accessibility
Log In Help Join The Motley Fool
Free Article
Join Nearly 1 Million Premium Members And Get More In-Depth Stock Guidance and Research
By Daniel B. Kline – Nov 15, 2018 at 5:41AM

It's good that this holiday doesn't break the bank, because the real shopping frenzy lies just ahead (or, annoyingly, during).

In some ways, Thanksgiving is becoming America's favorite forgotten holiday. Retail chains seemingly leap directly from Halloween displays to Santas and Christmas sales, and even in the midst of their celebrations, many consumers tend to get caught up in holiday shopping rather than enjoying a family-focused day of gratitude and reflection.

But even if Thanksgiving gets overshadowed by Black Friday sales, NFL games, parades, and who knows what else, it's still a day when most Americans gather for a festive meal with family and/or friends. And if that doesn't require quite the level of outlays as some holidays (since we generally don't exchange gifts or cards, wear costumes, or engage in over-the-top decorating), we do open our wallets a bit more than usual.

The average American plans to spend $175.65 on the holiday, according to a recent survey conducted by LendEDU. That's up from $165.14 last year, the first year the company conducted this survey. 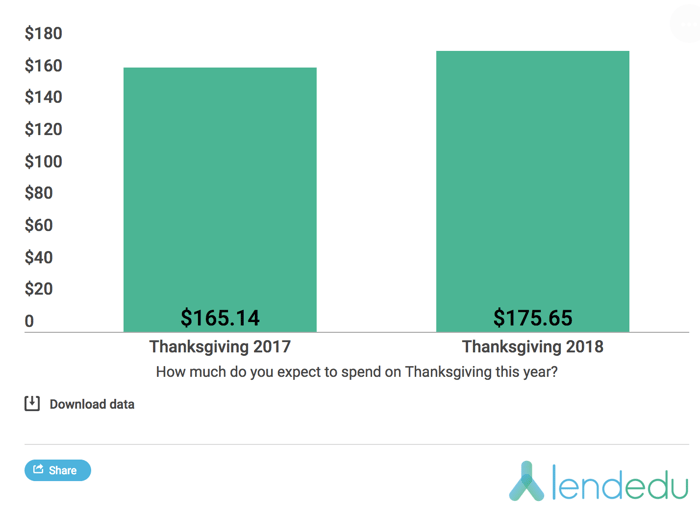 How is the money being spent?

Transportation will soak up a significant part of the average Thanksgiving budget, according to the survey. Nearly 51 million people will travel at least 50 miles to celebrate the holiday, according to AAA estimates. About 4 million Americans will fly somewhere, and 1.5 million will travel by train. And while the anticipated costs varied widely among survey respondents (due to the nature of travel), the average came out to $36.88 per person.

As you might imagine, the 1,000 survey respondents ranked food as their top expense. The survey, however, did not ask them to break out how much they plan to spend on anything aside from travel.

"While the average Thanksgiving expenditure may seem a bit high, it is important to remember that this is an average figure," wrote LendEDU Research Analyst Mike Brown wrote. "Some people have more extravagant Thanksgiving parties with more than 20 guests and a smorgasbord that will require a more generous budget. These respondents bring up the average Thanksgiving expenditure more so than those folks who enjoy just having a small group join them on Turkey Day." 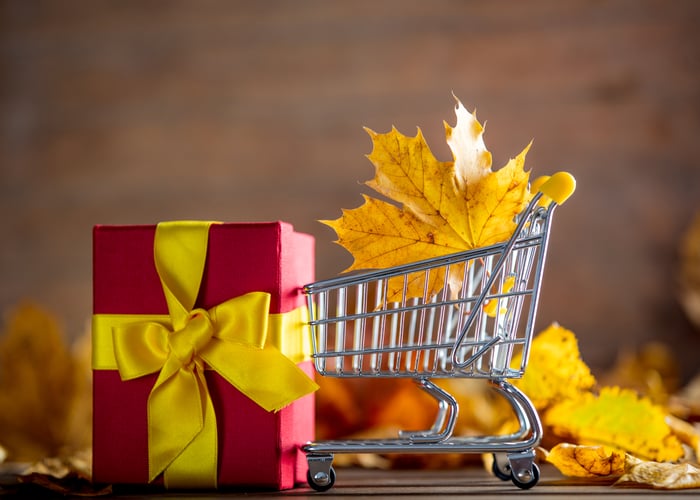 People don't generally give gifts on Thanksgiving but they do spend money. Image source: Getty Images.

Keeping the cost of thankfulness in check

If you're flying somewhere for the holiday, it's too late to change your plans in a way that saves any money. If you're driving, it makes sense to consider traveling during off-peak hours to both save a little money on gas and spend less time in traffic.

For those playing host, there are some small ways you can save -- and most of them are obvious. It's certainly reasonable to ask family members to bring bottles of wine, side dishes, or desserts. Spread the feast prep around. You can also cut back on things like flowers or centerpieces. This holiday is about the people around the table, not the snazzy decorations on it.

It is also about the food, of course, but here too, Thanksgiving doesn't have to be a break-the-bank holiday. Turkey isn't particularly expensive, nor are many of the most-favored side dishes. It's possible to have a superb holiday meal on a budget, and take a little time to enjoy your family and friends before the real seasonal madness takes over.