Earnings are out. And by "earnings," they mean losses.

Shares of Helios and Matheson Analytics (HMNY), 92% stakeholder in MoviePass, jumped a healthy 11.7% after third-quarter earnings came out this morning -- only to give almost all of that gain back after investors had a chance to actually see what Helios reported. As of 10:40 a.m. EST, Helios shares are showing a gain of less than 1% -- 0.6% to be precise. 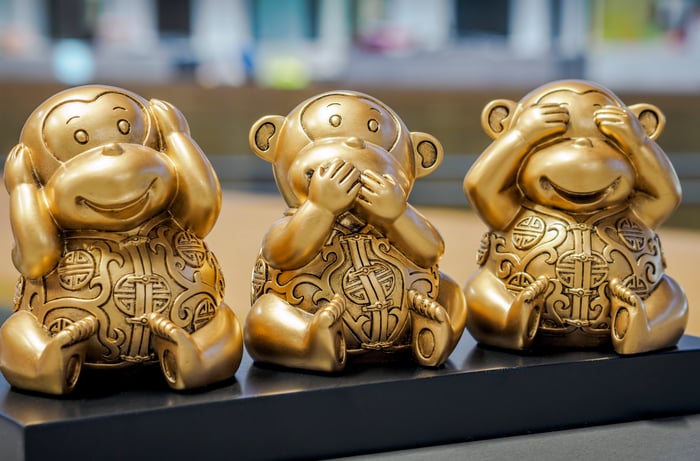 MoviePass's earnings release was an exercise in hear no evil, see no evil, and -- especially -- tell investors no evil. Image source: Getty Images.

On the "did" front, Helios informed investors that it grew "MoviePass Segment" revenues 10% sequentially to $80.5 million in the quarter. The company didn't have to spend nearly so much of that revenue buying movie tickets for its subscribers, either. With MoviePass having strangled access to its services to such an extent that, most days, many subscribers have no films at all available to see, MoviePass says its "average monthly usage per subscriber" has "dramatically" fallen to less than one movie per month.

Despite this fact, Helios is still managing to lose money -- $0.20 per diluted share.

On the "did not reveal" front, Helios didn't reveal how many subscribers it still has left (although in its 10-Q filing, it says the decline was "significant"). Nor was there word one on the status of Helios's recently mooted plan to spin off MoviePass into a separate company.

Nor did the company include any financial statements in its earnings press release, for that matter. In that regard, it's worth pointing out two more things that MoviePass's owner failed to mention: First, while revenues may have grown quarter over quarter, revenues declined 31% year over year (as revealed in the 10-Q statement that Helios and Matheson did file with the SEC). And second, bad as Helios's per-share loss looked, the explosive growth in Helios's share count tended to obscure the full extent of the increase in net losses at the company, which more than tripled to $137.2 million.

What's next for MoviePass and Helios? I honestly don't know (although I have a hunch). All I can say for certain is that it's hard to build a buy thesis off of numbers like these.