The home improvement chain has a high bar to meet when it posts third-quarter earnings on Tuesday.

There are a few reasons for investors to feel optimistic about Lowe's (LOW -0.29%) upcoming earnings report. The biggest one is that, in light of the most recent update from rival The Home Depot (HD -0.77%), it's clear that the home improvement industry is expanding at a decent rate. Lowe's will also likely have good news to report on the profitability front, due to recently-hired CEO Marvin Ellison's aggressive cost-cutting program.

But there will be plenty to watch for besides the headline sales and profit metrics. Let's take a closer look at the areas that investors should be focused on. 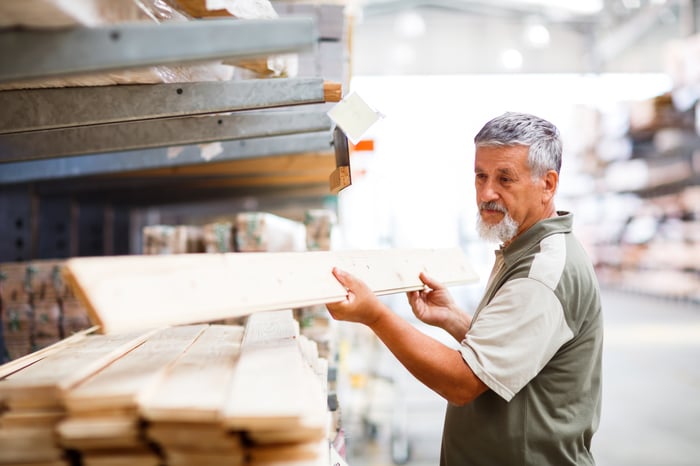 Lowe's frequently trails its bigger retailing peer on growth, and that contrast was especially sharp in the second quarter. While Home Depot announced an 8% comparable-store sales increase and hiked its full-year outlook for that metric to 5.3%, Lowe's posted just a 5% gain and lowered its 2018 prediction to a 3% uptick.

Looking deeper into the growth metrics, there were many ways in which Lowe's didn't live up to its potential last quarter. Customer traffic ticked up by less than 1%, compared to a 3% increase for Home Depot. Lowe's operating margin was 10%, compared to its rival's 14.5%. And the company struggled to keep its stores appropriately stocked to keep up with surging seasonal demand.

Ellison told investors in late August that his company was making moves toward becoming a world-class retailer, and investors will get an update on those initiatives on Tuesday. Lowe's has a high bar to meet, since Home Depot recently posted a 5% comp sales increase, along with a higher profit margin, for its third quarter.

Lowe's also might have news for investors on the cash-return front this week. After all, the company currently delivers just 35% of its earnings to investors in the form of dividends, compared to Home Depot's more generous 55% payout target. At the same time, Home Depot has ramped up its stock repurchase spending dramatically over the last six months, with buybacks now slated to reach $8 billion compared to its initial $4 billion goal for 2018.

Sure, Lowe's earnings aren't improving at the same pace as Home Depot's. However, the company is freeing up plenty of cash as it closes underperforming stores. At least some of that savings might find its way to shareholders through higher stock repurchases or a more generous dividend payout.

Lowe's cut its growth outlook in August because of company-specific inventory struggles as opposed to any bearish reading on the economy or the home improvement industry. But investors will get an important update on that prediction on Tuesday.

For its part, Home Depot said this week that key metrics -- including economic growth, unemployment, and consumer sentiment -- all continue to support steady expansions in home improvement spending. These trends are being tempered right now by a worsening of housing-specific metrics like mortgage rates and new-home purchases. Still, Home Depot's management team saw enough healthy demand in Q3 to support further increases to the company's outlook on both the top and bottom lines. If Lowe's doesn't sound a similarly upbeat tone, then the retailer won't be able to blame a sluggish industry for its challenges.