It's all about 3D sensing.

Back in 2013, Apple (AAPL 2.44%) introduced the iPhone 5s, with a Touch ID fingerprint scanner. Touch ID was a big deal, and many smartphone makers rushed to implement similar functionality -- which proved a boon for makers of fingerprint-sensing solutions.

Then, in November of 2017, Apple began selling its ultra-premium iPhone X smartphone. The iPhone X did away entirely with Touch ID (although rumors circulated that Apple had attempted -- and failed -- to implement an under-the-screen fingerprint scanning solution) and replaced it with a technology dubbed Face ID. 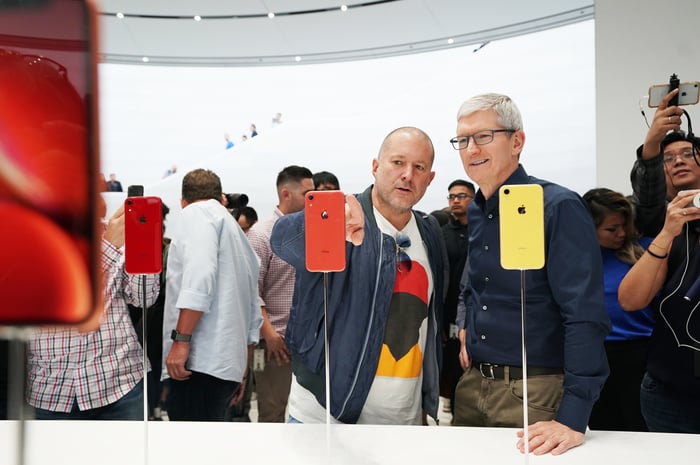 Face ID uses a depth-sensing front-facing camera -- Apple calls it a TrueDepth camera -- to implement 3D facial recognition. (This is why, unlike some other facial-recognition implementations, Apple's can't be "spoofed" by things like pictures.)

According to respected analyst Ming-Chi Kuo with TF International Securities (via MacRumors), Apple has a pretty exciting roadmap of technologies for iPhone 3D sensing technologies over the next two years. Let's take a look.

Kuo says that in all of next year's iPhones -- that means the successors to the iPhone XS, iPhone XS Max, and the lower-cost iPhone XR -- will incorporate an upgraded TrueDepth camera. (Apple appears to have reused the TrueDepth camera from the iPhone X in this year's models, with the speed enhancements coming from improvements in processing hardware.)

"We believe that Apple will raise the output power of the flood illuminator VCSEL [vertical-cavity surface-emitting laser] to lower the impacts from invisible lights of [the] environment in order to improve the Face ID user experience," Kuo wrote.

Apparently, this should be good news for investors in the suppliers of VCSEL components, because the "higher power VCSEL with higher [average selling price] needs increased requirements for design and production, increased materials for array design, and longer testing times," said Kuo.

Apple made it clear that it was all-in on Face ID with the launch of the iPhone X. It has since proliferated the technology more broadly across both its iPhone product stack (all new iPhones in 2018 had it, compared to just one of three models in 2017) and its latest iPad Pro tablets. It's unsurprising that it's putting its vast might in research and development -- the company spent $14.2 billion in R&D during its fiscal 2018, up 23% from a year earlier -- toward improving the technology.

More than just TrueDepth in 2020

ToF, MacRumors explains, "is designed to determine the distance between objects by measuring the time-of-flight of a light or laser signal between the camera and the subject at each point in the image." Kuo explained that adding this capability to the 2020 iPhones "will create the new [augmented reality] experience and improve photo quality."

Moreover, the analyst expects that this ToF implementation "may adopt the higher-than-1,000nm wavelength VCSEL (vs. current Face ID's 935-945nm) for better system design and user experience."

Apple seems to be heavily investing in augmented reality, and the quality of smartphone cameras is important to potential buyers. Given those factors, the addition of a ToF depth-sensing solution in the rear-facing cameras of the 2020 iPhones is exciting.