The online retail giant is always playing the long game.

The e-commerce market has become increasingly competitive over the past few years, with Target (TGT 0.10%) and Walmart (WMT -0.80%) mostly playing catch-up to Amazon's (AMZN -1.65%) online dominance.

There's evidence that the two companies are making some headway in their online initiatives (see here and here), and they are taking on Amazon in an even bigger way this holiday season by giving their online customers free shipping for all online orders. Meaning, there's no minimum amount customers have to spend to get free shipping.

Not to be outdone, Amazon recently answered back by offering all of its U.S. customers free shipping as well during the holiday season, also guaranteeing that packages would arrive before the Christmas holiday.

However, while Target and Walmart may have been the first to offer this deal, Amazon still has the potential to be the real winner when the dust settles. 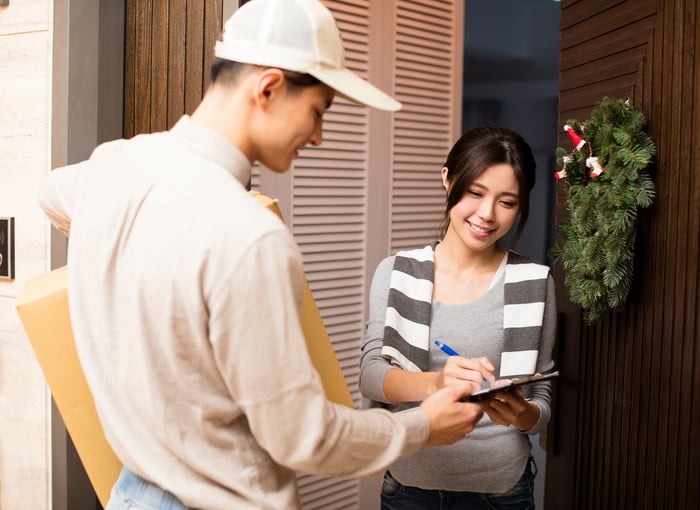 It's all about converting regular customers to Prime members

The first advantage Amazon has over Walmart's and Target's offers is that Amazon has more items that will qualify for free shipping than its competitors do. Amazon drew attention to this fact in its press release when it said, "This offer applies to hundreds of millions of items -- the largest free shipping selection in the country." Meanwhile, Walmart said that just "millions" of items would be available for free shipping from their websites, and Target said "hundreds of thousands of item" will be available for free two-day shipping.

Target and Walmart will ship their packages faster -- both offering free two-day shipping -- while Amazon doesn't specify how fast its packages will ship, but says they'll be delivered before the Christmas holiday. So, does faster shipping from Target and Walmart mean this holiday promotion battle is a draw? Not quite.

Walmart and Target will likely get a lot of customers to make one-time purchases on their websites with their shipping promotions. Amazon will do the same, but the difference is that Amazon will then expose those customers to its seemingly endless amount of items, its superior customer service, and the host of other services that come with its Prime membership.

Think of it this way: At the end of the holiday season, millions of shoppers will have ordered from Amazon, Target, and Walmart. But only Amazon will be able to offer its customers a membership that comes with free a video-streaming service, free music streaming, discounts on items, free one-day shipping in many locations, and free two-day shipping all year long on hundreds of millions of items.

In short, Amazon will use the free shipping promotion to get more people to consider signing up for its Prime membership, while Target and Walmart will likely just boost their online holiday season sales without making those shoppers long-term customers.

What Amazon investors should remember

If Amazon can convince a fraction of its holiday customers to become Prime members, it could pay off in huge ways. Prime members tend to spend about $1,400 per year on Amazon's website compared to $600 for non-Prime members. And the longer they remain a Prime member, the more money they spend.

Walmart and Target don't have anything close to what Amazon has built out with its Prime membership, nor do they have the same devices and services that keep Amazon Prime members hooked on the e-commerce site. For example, Amazon customers who have an Echo speaker device spend $400 more per year with Amazon than the average Prime member spends.

While Target and Walmart are taking Amazon head-on with free shipping, Amazon has always focused on its long-term strategy of getting customers hooked into its ecosystem of services, devices, and its e-commerce platform -- and this latest free shipping offer is no different.

Research from eMarketer shows that in 2019, more than one-half of all U.S. households will be signed up for the membership, and global Prime members are expected to double over the next 10 years to 275 million.

The fact is that Amazon's holiday shipping promotion will likely help boost Prime membership and eventually turn holiday shoppers into years-long revenue generators for the company.

John Mackey, CEO of Whole Foods Market, an Amazon subsidiary, is a member of The Motley Fool's board of directors. Chris Neiger has no position in any of the stocks mentioned. The Motley Fool owns shares of and recommends Amazon. The Motley Fool has a disclosure policy.