Here are three key things from NVIDIA's earnings call that investors should know.

These results were quite solid, though they didn't meet Wall Street's expectations of adjusted EPS of $1.93 on revenue of $3.24 billion, and revenue also fell a bit short of the lower end of NVIDIA's guidance range of $3.19 billion to $3.32 billion. Moreover, the company issued extremely weak fourth-quarter revenue guidance of $2.70 billion, plus or minus 2%, representing a decline of about 7% year over year. The Street was looking for $3.4 billion, or growth of nearly 17%.

The culprit for Q3's somewhat-weaker-than-anticipated results and Q4's anemic outlook is the cryptocurrency market bust, which has resulted in excess inventory of midrange graphics cards in the distribution channel.

Given NVIDIA's majorly disappointing guidance, it's not surprising the market pummeled the stock, sending shares to a closing loss of 18.8% on Friday. Shares have lost 14.9% in 2018, versus the S&P 500's 4.1% return.

This turn of events makes management's comments during the earnings call much more important than usual. Here's what you should know. 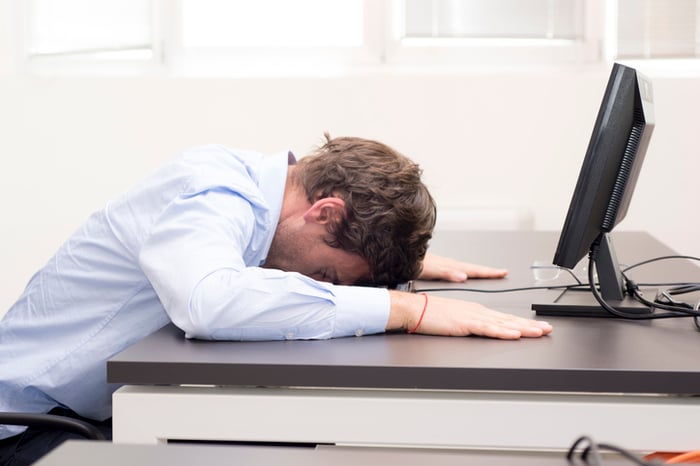 For reference, here are NVIDIA's results by platform:

Here's how CEO Jensen Huang explained what's been happening in the gaming business that curtailed its growth in Q3 and is expected to even more significantly negatively affect its growth in Q4:

We came into Q3 with excess channel inventory [of midrange GeForce graphics cards based on the Pascal GPU architecture] post the crypto hangover. We expected the [elevated] pricing in the marketplace to decline [since the crypto market had crashed]. It declined slower than we expected. And ... the volume increase took longer than we expected. At this point, most of the pricing has come down to -- and slightly below -- pre-launch levels. And so I'm hopeful that now that pricing has stabilized that customers will come back and buy.

For background and to explain what Huang means by the "crypto hangover": Some cryptocurrency "miners" had been buying NVIDIA's (along with rival Advanced Micro Devices') midrange gaming cards to use to mine digital currencies, rather than buying its application-specific product. So when the cryptocurrency market crashed earlier this year (as shown in the following chart), sales of these cards to miners naturally fell off sharply. But what also happened -- and this is the sole concern at this point -- is that sales of these cards to gamers also slowed because retail prices remained elevated from the crypto boom longer than management expected.

Huang went on to say that he supposed that "when pricing is volatile in the channel, it probably freezes" some potential customers. This makes sense for the midrange cards because we're generally talking about customers who are not hardcore gamers. Generally speaking, folks who are buying midrange cards aren't likely to be as anxious as hardcore gamers to get their hands on a new card. So, as a group, they're not likely to react on a dime as soon as elevated prices for cards come back down to normal levels.

CFO Colette Kress said that while management expects the excess inventory situation to right itself by the end of the fourth quarter, she left open the possibility that it could persist into the first quarter of fiscal 2020. 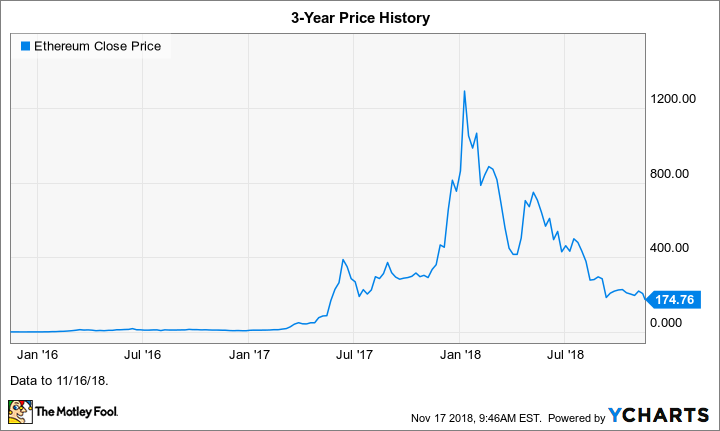 The crypto boom and bust. NVIDIA's cards were largely used to mine the cryptocurrency Ethereum. Data by YCharts.

2. Management credibility took a hit over the "crypto hangover" situation

From Huang's remarks addressing a question about whether management saw this situation coming:

We [were as] surprised by it as anybody else. The crypto hangover lasted longer than we expected. Prices started to drift down and we expected [them] to come down much more quickly than [they] did. ... And so I think the channel wanted to protect its price.

While the hit to management's credibility is nowhere near the magnitude of what Facebook's top management is taking, it's still nonetheless a ding and should make investors somewhat more cautious about trusting management's words. After all, it was only last quarter during the Q2 call that Huang said this:

We are masters at managing our channel, and we understand the channel very well.

Obviously, this turned out to not be entirely accurate. While management is certainly at fault, part of the blame goes to the those distribution partners who were too greedy and kept prices elevated too long after the crypto boom had ended, no doubt hoping it would reignite.

3. In Q4, excluding gaming, the rest of the business in total is expected to grow sequentially

From CFO Colette Kress' remarks to an analyst who asked whether management expected the non-gaming part of the business in aggregate to grow sequentially in Q4:

In aggregate, yes, we do believe the rest of the business will grow sequentially.

Kress' comment is reassuring. Of course, it's only a projection, and since there are about two and a half months left in the fourth quarter, it's a very early projection. Moreover, investors should probably now be a bit more skeptical about management's comments.

This tidbit is very important, as it indicates that, excluding gaming, the rest of NVIDIA's business is quite healthy. As long-term investors, we don't care that much about the topic that dominated the call: the crypto hangover's effect on results for Q4. While Wall Street is focused on the near term, we're focused on the bigger picture. It's obvious that gaming's glut of midrange graphics cards is only temporary and will work itself out. After all, there will always be some gamers who desire graphics cards in the middle of the price range. And since NVIDIA's affected GeForce 1060 is the No. 1 selling graphics card in the world, the company remains poised to continue to capture the bulk of that demand.

A temporary bump in the growth road

The crypto hangover is only a temporary bump in the road. Nothing material has changed regarding NVIDIA's enviably long-term growth opportunities in gaming, artificial intelligence, driverless vehicles, and other fast-growing markets.