The company is rolling out a remote checkout program just in time for the holidays.

Anyone who's done any holiday shopping knows that long checkout lines are one of the most frustrating parts of the experience. Walmart ( WMT -2.48% ) is well aware that this is a pain point for customers and has pledged in past years to keep all of its checkout lanes open in order to cut wait times as much as possible.

However, this year, the retail giant is upping its game. In the spring, Walmart introduced a pilot program called Check Out with Me, which allows customers to check out and get a receipt from associates stationed in the aisles, rather than waiting in line at a checkout counter.

After testing this program in its Lawn & Garden centers at 350 stores, Walmart is ready to roll it out to all of its U.S. supercenters just in time for the holiday season. Walmart is placing employees at strategic points like garden centers, electronics departments, and the wide-open aisles it calls "action alleys" in order to easily assist shoppers. 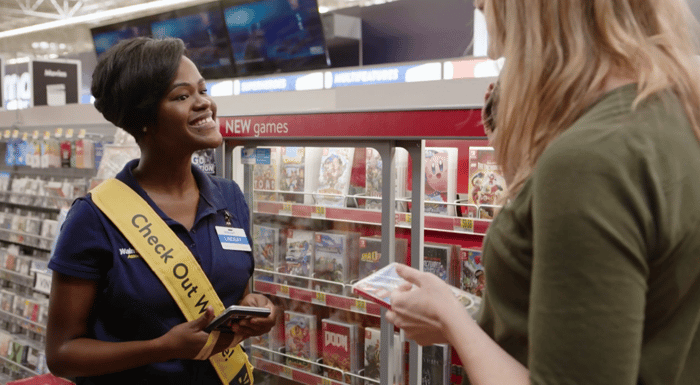 In order to further improve the customer experience, Walmart is rolling out things like app-based store maps to help shoppers quickly navigate the store and get what they want. Walmart is far from being the first retailer to allow customers to check out without a register. For example, Macy's added mobile checkout earlier this year in order to alleviate some of the same problems, and Apple stores famously have no registers. Nevertheless, this move represents an important step in Walmart's efforts to make its stores more convenient and accessible as the company seeks to fend off Amazon ( AMZN -1.81% ).

A prelude to automation

Walmart's Check Out with Me program also shows where the company is headed in terms of automation. A recent move at its membership club chain Sam's Club further signals its intent. At the end of October, Sam's Club said it was on the verge of opening a new type of store in Dallas called Sam's Club Now. Sam's Club Now customers will use the company's Scan and Go app to add items into their carts as they shop. This setup bears some resemblance to Amazon Go: Amazon's cashierless stores where customers pay with an app.

Unlike the Amazon Go concept, the Sam's Club Now store doesn't rely on a network of cameras to monitor what customers take off the shelves. However, the company plans to eventually install 700 cameras to help it with store inventory and layout.

It's unclear if the new Sam's Club concept, which is just a quarter the size of an average Sam's Club, will be expanded to additional stores. But it's easy to see how this experiment could lead to Walmart adopting some of the same technologies in the future, especially with the threat of Amazon opening up to 3,000 of its Go stores by 2021.

Amazon will continue to win the tech plaudits in its duel with Walmart as it invests in areas like Alexa, Amazon Go, and cloud computing. That said, Walmart's store base is proving to be a stronger advantage than many thought, and the company's e-commerce strategy has been built largely around its existing real-estate footprint.

E-commerce sales jumped 43% in the most recent quarter, contributing 140 basis points to Walmart's comparable sales growth. This accounted for nearly half of its 3.4% increase in that key metric. Walmart was able to do this by rapidly expanding initiatives like grocery pickup, which is now available at nearly 2,100 stores; grocery delivery, which will have 800 participating stores by the end of the year, reaching 40% of the U.S. population; and its pickup towers at 700 stores, which enable easy pickup of online orders.

That expansion has pushed Walmart ahead of Amazon as the nation's No. 1 online grocery retailer, despite Amazon's purchase of Whole Foods and its expansion of Whole Foods delivery nationwide through Prime Now. Walmart has assumed the mantle in part because it has about ten times the number of domestic stores as Whole Foods, which is why Amazon will have to open more physical stores if it wants to gain meaningful market share in the grocery business.

For now, efforts like Check Out with Me, grocery pickup and delivery, and pickup towers are not only keeping Amazon at bay, they're helping Walmart gain share in e-commerce. Walmart may never match the technological prowess of the Amazon Go stores, but it doesn't need to if it can give customers the right combination of low prices and convenience to keep them coming back.