Disney (NYSE:DIS) stock has overcome market volatility and concerns about cord-cutting's impact on the business' media networks segment to post gains on the year and outperform the broader market. Strong showings for the company's film and theme park businesses helped the multimedia giant deliver record results in its recently wrapped fiscal year. But big acquisition news and the promise of an upcoming product launch also appear to have factored into the company's gains in 2018. 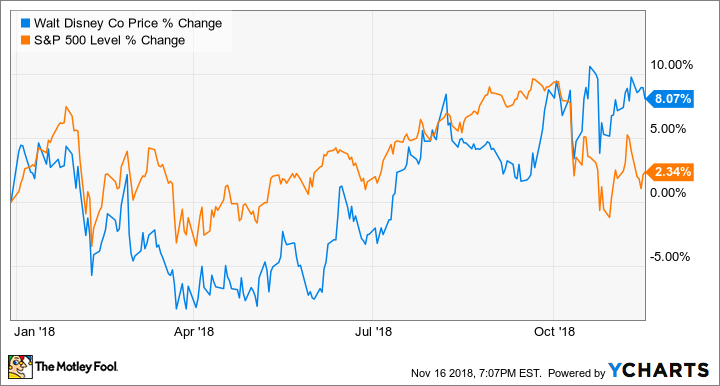 Shares hit a lifetime high in October, finally surpassing the previous high mark they reached in 2015, as expectations mounted that the company would deliver a strong fourth-quarter report in November. Results for the period came in ahead of expectations, helping the stock stay in the neighborhood of its new pricing high amid sell-offs for the broader market, and shares are now up roughly 8% on the year. 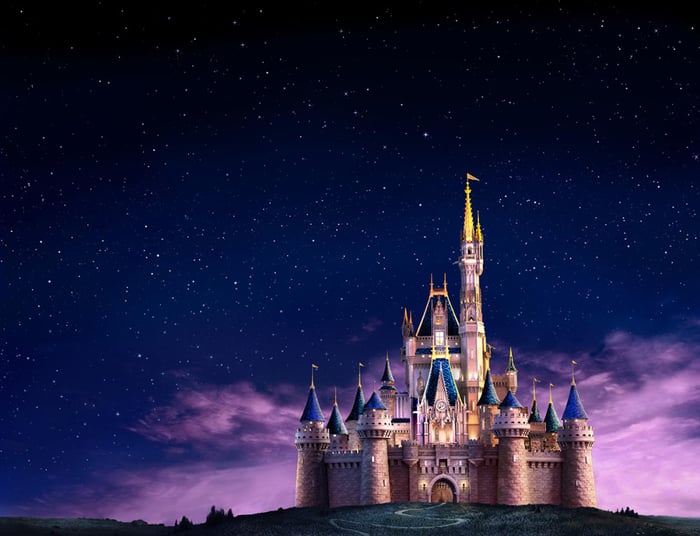 Domination in the film industry

While Disney's studio entertainment segment was only its third-highest sales and earnings contributor last year, great performance for the company's 2018 movie slate was one of the business' biggest stories and a key driver of results. The filmed entertainment business did see some big misfires, most notably the shockingly low sales for Solo: A Star Wars Story, but great results for Marvel Cinematic Universe entries and a Pixar sequel helped push the overall segment above expectations.

Black Panther crushed expectations to deliver roughly $1.35 billion in ticket sales, Avengers: Infinity War grossed over $2 billion, Incredibles 2 scored $1.24 billion at the box office, and Ant-Man and the Wasp grossed over $620 million.That slate gives Disney five of the year's top-10 highest-grossing films so far. After the company's purchase of Fox's film properties goes through and the Deadpool franchise joins the Magic Kingdom, Disney will own the properties behind six of 2018's current top-10 highest grossing movies.

That kind of market-share snapshot reflects how dominant the company's position in the film industry is looking, and this advantage will likely extend beyond the box office and translate to momentum in the streaming space, while also adding to the appeal of its parks and bolstering its merchandise licensing business.

Disney stock got a boost in mid-June after AT&T successfully defended its acquisition of Time Warner from an antitrust suit by the Justice Department, a development that seemed to pave the way for the House of Mouse to move ahead with its bid for Fox's key entertainment assets. Disney raised its bid on the Fox properties to $71.3 billion less than a week after the AT&T-Time Warner ruling, and the Department of Justice then officially granted approval to the deal late in June.

Shares continued to climb in July as the broader market gained ground and Disney narrowed in on finalizing its big purchase, with each company's shareholders voting to approve the deal on July 27. Disney stock did lose momentum in August after the company published third-quarter sales and earnings that fell short of the average analyst targets, but it fired back in November with fourth-quarter results that surpassed expectations.

Sales for Disney's quarter that included September rose 12% year over year to reach $14.3 billion, while net income jumped a whopping 33% to reach roughly $2.3 billion, and adjusted earnings per share were up 38% to $1.48. Strong performance for the period was driven by the company's movie and theme parks segments. Studio entertainment grew revenue 50% versus the prior-year period, and saw its operating income climb a whopping 174%. Theme park revenue grew 9% year over year and generated a 12% year-over-year operating income increase.

Next year could be bigger

The acquisition of Fox assets will reportedly close early in 2019, but even without factoring in franchises like X-Men, the House of Mouse is set to have an absolutely massive year at the box office. Disney's movie wing looks ready to set records next year, with new installments in the Marvel Cinematic Universe, Toy Story 4, Frozen 2, Star Wars: Episode IX, and live-action remakes of Aladdin and The Lion King likely to score up big ticket sales. That lineup appears likely to power its movie business above an already very strong 2018, and it should also help the company's consumer products segment return to growth.

While the company's 2019 film slate is filled with titles that investors will want to keep an eye on, the biggest event for the business next year will likely be the launch of its streaming service for films and television series. Disney+ still doesn't have a concrete launch date, but management says that it's expected to debut toward the end of next year.

Even after its recent gains, Disney stock does not appear to be prohibitively valued, trading at roughly 16 times this year's expected earnings. The company's media networks segment will continue to face pressure from cord-cutting. But with strong growth for its theme parks and movie businesses, untapped potential in streaming, and a fast-growing dividend component, the House of Mouse looks appealing from a long-term investing standpoint.