The last major consumer electronics superstore left standing reports quarterly results on Tuesday morning. The real dagger could be its guidance for the holiday-containing fourth quarter.

One of the market's most surprising turnaround stories is starting to lose momentum. Shares of Best Buy ( BBY -3.69% ) have fallen 21% since peaking three months ago, and that's not the kind of direction you want to be heading in just ahead of a crucial financial update. Best Buy reports its fiscal third-quarter results on Tuesday morning.

Best Buy stock's all-time high in mid-August came just days before the consumer electronics retailer posted its fiscal second-quarter numbers. It didn't impress the market then, and the real concern now is that it will also disappoint this time around. The company put out problematic guidance last time out, and it will have to come out with a far more encouraging report if it wants to get back on the winning track. 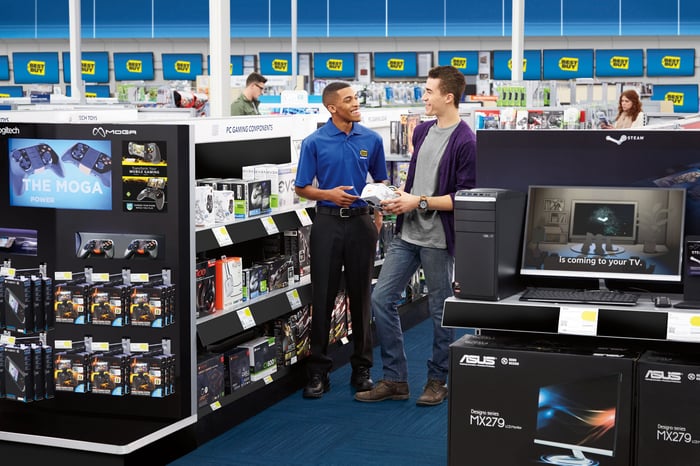 It may not be a blue polo Christmas

Analysts aren't holding out for much in tomorrow's financial report. They see revenue rising a mere 2.7% to $9.57 billion, Best Buy's third consecutive period of decelerating top-line growth. It would also be the chain's weakest revenue increase since the springtime of last year. Those same Wall Street pros see earning per share growing from $0.78 to $0.85, and that 9% growth is also slower than its recent pace.

The market is braced for a slowdown at Best Buy, but those analyst targets are actually better than the company's own summertime guidance. Its outlook three months ago was for EPS growth of 1% to 8% on $9.4 billion to $9.5 billion in enterprise value.

Guidance is another thing that can trip Best Buy up this week. Its fiscal fourth quarter will be pitted against last year's blowout holiday performance, a report that saw the chain come through with its headiest top-line growth in nearly a decade. As great as 9% comps during the seasonally potent fiscal fourth quarter may have been, it will make it that much harder to build on that this time around. Analysts are already modeling a slight decline in revenue. We'll see how Best Buy's own outlook plays out.

Another pressure point is that some Wall Street pros are souring on the turnaround story. BofA Merrill analyst Curtis Nagle downgraded the stock last week, lowering his price target from $92 to $70. He sees slowing industry growth, cost inflation, and difficult comparisons in key products weighing on near-term performance, justifying the former bull's shift to a neutral position on the stock.

Brandon Fletcher at Bernstein also reacted negatively to reports earlier this month claiming that Apple would be stocking a wider range of products directly through Amazon.com. Fletcher argues that Best Buy's days of protected status as the last traditional consumer electronics difference-maker are waning -- and with that, the stock's stiff valuation.

One can argue that the stock's recent weakness is already discounting a soft fiscal third quarter and weak guidance for the holiday period. Bulls can also point out that Best Buy's sustainable 2.7% yield will help support the stock if it experiences a post-earnings sell-off. The only sure bet is that the stock will move, and that is why Best Buy has a lot to prove.