The company's making some big strategic moves to boost its prospects.

Tech companies have huge opportunities right now, with fields like artificial intelligence opening up new possibilities for a wide range of players in the industry. Nuance Communications (NUAN) has sought to use its prowess in voice recognition and natural language computing in a variety of different ways, but with so many areas to pursue, it's been difficult for the company to keep focus.

Coming into Monday's fiscal fourth-quarter financial report, Nuance investors had high expectations that the company would be able to chart a course toward playing a stronger role in technological innovation. Nuance's results were solid, but investors weren't entirely comfortable with the extent to which the company intends to transform itself in the near future. 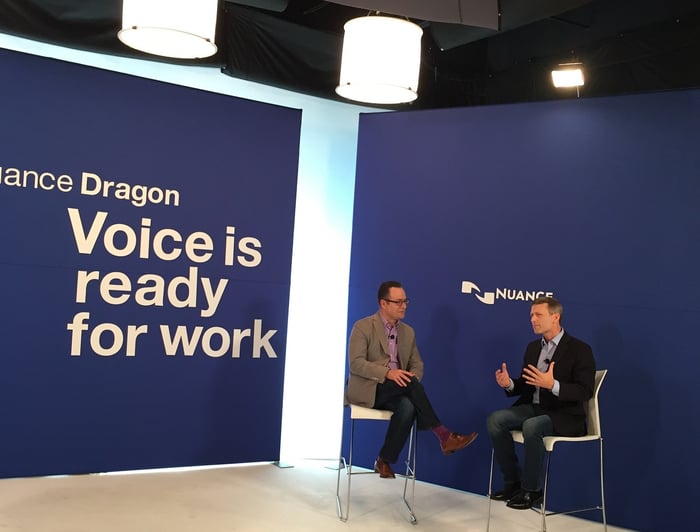 The latest from Nuance

Nuance's fiscal fourth-quarter results were generally encouraging. Revenue was higher by 13% to $536.2 million, accelerating from its pace of just 3% a quarter ago and outpacing the 11% growth rate that most investors were expecting to see. Adjusted net income soared by 87% to $112.5 million, and the resulting $0.38 per share in adjusted earnings topped the consensus forecast among those following the stock by $0.06 per share.

Fundamentally, Nuance saw dramatic improvement from previous quarters. Organic revenue jumped 12% during the quarter, with recurring revenue making up more than 70% of its overall sales. Nuance saw net new bookings grow by 10% to $468.5 million, accelerating from its 7% growth rate in the fiscal third quarter.

Nuance saw some huge changes in its various component businesses. The healthcare segment, which has historically brought in the most revenue, saw a huge recovery, as segment sales jumped 28% on particular strength in the Dragon Medical Cloud and hosting areas. Strength in the automotive category also persisted from recent quarters, with top-line growth of 10%. Enterprise revenue climbed 6% from year-ago levels, while only the imaging business suffered year-over-year declines, falling 14%. The catch-all "other" segment experienced an 11% rise in revenue.

CEO Mark Benjamin made it clear that long-term strategy is the key priority for Nuance right now. "Perhaps most importantly," Benjamin said, "we conducted our strategic portfolio reviews and made definitive business decisions that will accelerate our future growth." In the CEO's words, Nuance's new era will require "building a global, conversational AI business that is capable of sustainable long-term revenue and earnings growth."

To go with those efforts, Nuance will also make moves with its organizational structure to match up oversight with corporate resources. The spinoff of Nuance Auto will happen before the end of the new fiscal year.

Yet Nuance's guidance for fiscal 2019 didn't live up to all the expectations that investors had. Revenue of $2.055 billion to $2.105 billion leaves almost no room for growth from the 2018 fiscal year's actual sales of $2.069 billion, and Nuance projected organic growth of -1% to +1%. Margin levels might expand slightly from 2018 levels, but adjusted earnings of $1.19 to $1.27 per share would be flat to up 7% from the past year's bottom line -- hardly the aggressive growth that shareholders would have preferred to see.

Nuance shareholders didn't react favorably to that guidance, and even the possibility of a spinoff didn't keep the stock from losing more than 4% in after-hours trading following the announcement. Strategic moves might well pay off for Nuance in the long run, but investors don't seem to be ready to deal with the short-term pain that will likely result from its transformative efforts.