The market continues to digest abysmal guidance from the graphics chip leader.

Shares of graphics chip company NVIDIA (NVDA -2.51%) slumped on Monday, the second day of a post-earnings reckoning. NVIDIA's third-quarter report on Nov. 15 featured guidance calling for a fourth-quarter revenue decline, the result of an inventory correction following the implosion of cryptocurrency-related demand.

Adding fuel to the fire, the stock market was in sell-off mode on Monday. NVIDIA stock was down about 9.5% at 2:20 p.m. EST, while the Nasdaq Composite had shed about 3% of its value. 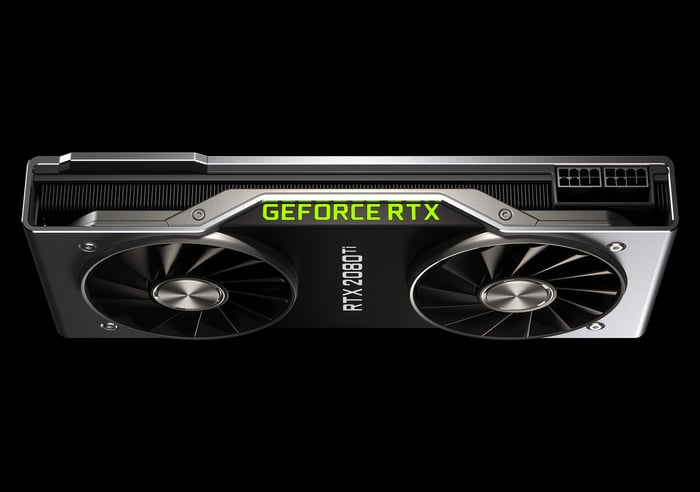 NVIDIA expects to report fourth-quarter revenue of $2.7 billion, plus or minus 2%. That's down 7.8% year over year at the midpoint, and far below analyst expectations of $3.4 billion. With NVIDIA's non-gaming segments likely to grow on a year-over-year basis, the gaming segment will slump by an even greater percentage.

The company blamed an excess of channel inventory due to disappearing demand from cryptocurrency miners. But like rival AMD, NVIDIA anticipated that cryptocurrency demand would vanish. NVIDIA CFO Colette Kress said in the second-quarter earnings call back in August that the company expected "a negligible contribution" from crypto-specific products in the future. The only conclusion is that NVIDIA underestimated how much of its gaming revenue was being driven by this temporary source of demand.

NVIDIA expects this inventory correction to be resolved by the end of the fourth quarter, according to CEO Jensen Huang in the third-quarter earnings call, but that may be overly optimistic. Analyst Romit Shah of Instinet thinks revenue could decline in NVIDIA's next fiscal year, the result of this inventory correction coupled with weak demand for NVIDIA's newest 20-series graphics cards.

AMD has a similar inventory problem, and a potential deluge of used graphics cards from cryptocurrency miners could make working through that inventory difficult. While it's possible NVIDIA's results could rebound quickly, investors should buckle up for a rough ride ahead.