Please ensure Javascript is enabled for purposes of website accessibility
Log In Help Join The Motley Fool
Free Article Join Over 1 Million Premium Members And Get More In-Depth Stock Guidance and Research
By Adam Levine-Weinberg - Nov 20, 2018 at 9:40AM

Since then, Airbus has struggled to build up a robust backlog of A330neo orders. But last week, Delta announced that it has ordered 10 additional A330-900neos -- and that it may continue to add to that order in future years.

Airbus hoped that Delta's initial A330neo order would provide a seal of approval for the updated version of its A330 wide-body family, giving other airlines the confidence to order the new models.

However, the Delta deal failed to drive much in the way of additional order activity. Airbus already had 121 commitments for the A330neo before it received the Delta order in late 2014. As of the end of September 2018, Airbus had only 224 firm orders for the A330neo family. 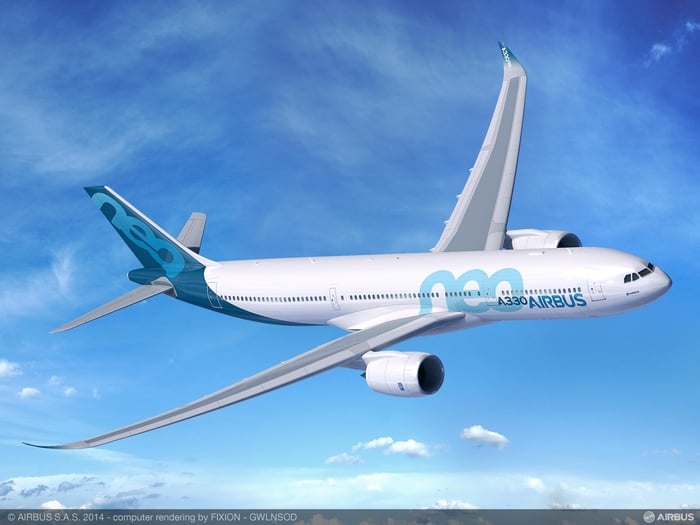 Demand for the Airbus A330neo family has been tepid. Image source: Airbus.

This has forced Airbus to steadily reduce its production plans for the A330 family as a whole. The European aerospace giant plans to deliver just 50 A330s (including both the first-generation models and the "neo" models) in 2019, down from more than 100 annually between 2012 and 2015. To avoid further production cuts -- and eventually return to production growth -- Airbus needs to secure more orders.

Last Friday, Delta Air Lines and Airbus confirmed that the airline has expanded its A330-900neo order by 10 units, to a total of 35 aircraft. At the same time, Delta deferred its last 10 orders for the longer-range (and pricier) A350-900 to 2025 and 2026. It also has further flexibility on that order, and it could eventually convert the remaining 10 A350 orders to A330neos.

This order almost certainly explains the 10 A330-900neos that showed up in Airbus' backlog last month, attributed to an unidentified customer.

Delta also accelerated its A330neo deliveries. (Or, to be more accurate, it reversed a previous delay to its delivery schedule.) The carrier had originally planned to receive its first four A330-900neos in 2019, but by the beginning of this year, it expected the first four deliveries to come in 2020. Now, Delta expects to receive its first A330neo in 2019 once again.

The A330-900neo has enough range to cover the vast majority of Delta's current routes. Some of these aircraft may be used for growth (especially in the lucrative transatlantic market), but they will mainly replace Delta's oldest Boeing 767s. Indeed, Delta has 19 767s that are at least 25 years old today -- and thus near the end of their useful lives -- and dozens more that were built in the mid to late 1990s and will be ripe for replacement a few years down the road.

A smart choice for Delta

The A330-900neo will be much cheaper to operate on a per-seat basis than Delta's 767s. This order will contribute to the carrier's effort to hold annual non-fuel unit cost increases to less than 2%, while improving fuel efficiency.

Meanwhile, by accelerating the delivery schedule a bit, Delta Air Lines will also be able to build up its inventory of international premium economy seats faster, without having to invest in cabin modifications for older planes that will be retired soon anyway.

Many airlines are reluctant to order aircraft types like the A330neo, which don't seem to be catching on with other operators. Yet Delta Air Lines has shown that it can operate such "orphan" aircraft reliably. Given how urgently Airbus needs to rack up more A330neo orders, Delta probably got a very good deal on these planes, making the decision to buy more A330neos a wise one.