Kohl's third-quarter earnings report and Q4 guidance didn't quite live up to investors' lofty expectations, but the plunge in its stock price is a huge overreaction.

Kohl's earnings report came out on Tuesday morning, and the stock joined its department-store peers in the doldrums with a 9% decline as of 1 p.m. EST. Yet while the earnings report wasn't everything that bulls had hoped for, it did show that Kohl's continues to make steady progress in improving its position in the retail industry. 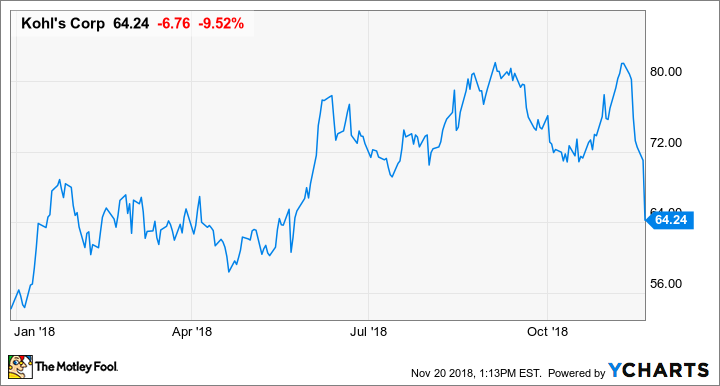 Kohl's posted a 2.5% comp-sales increase in the third quarter on a "shifted" basis, which adjusts for a change in the timing of the fiscal quarter relative to the calendar year. That represented a slight slowdown relative to its 3.1% shifted comp-sales increase a quarter earlier but exceeded the 1.8% increase Kohl's achieved for the first half of fiscal 2018 as a whole.

Comparable-store sales rose 1% on an unshifted basis, driving a 1.3% increase in net sales, to $4.37 billion -- just ahead of the average analyst estimate of $4.36 billion.

Of course, even a 24% tax rate would be a lot lower than what Kohl's was paying last year. Indeed, tax reform drove the vast majority of the company's EPS growth in the third quarter. Pretax income increased by a more modest 6.6%, reaching $195 million. 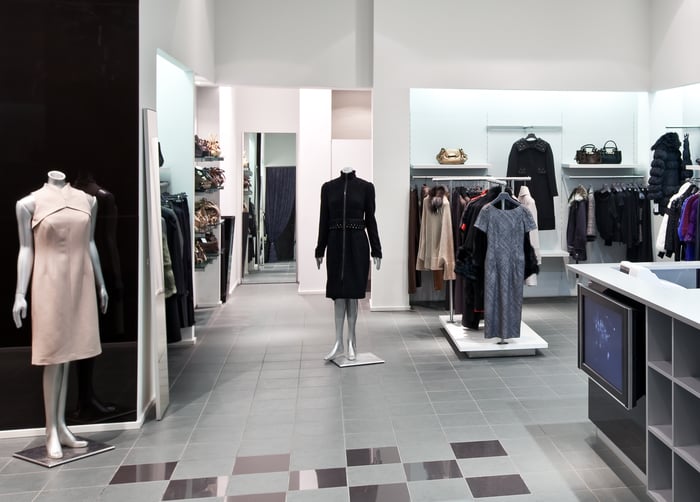 While Kohl's sales results last quarter were in line with analysts' estimates, many investors were hoping for an acceleration in growth in light of the favorable consumer-spending backdrop. Kohl's did raise its full-year comp-sales guidance range slightly (to 1%-2% from a previous 0.5%-2%), but that apparently wasn't enough to meet expectations.

Investors may have been even more disappointed by Kohl's EPS forecast. The retailer raised its guidance range for full-year adjusted EPS from $5.15-$5.55 to $5.35-$5.55. However, analysts already had been expecting EPS of $5.51, near the high end of both ranges.

Furthermore, the updated guidance implies that adjusted EPS will come in between $1.97 and $2.17 in the fourth quarter compared to $1.99 last year. That would mark a dramatic slowdown in the company's earnings growth.

The sell-off is a great buying opportunity

Even if Kohl's didn't knock it out of the park with its third-quarter results, the recent plunge in its share price represents a great buying opportunity for several reasons.

First, Kohl's slightly disappointing full-year EPS guidance may be very conservative. Last year, the company's full-year EPS surpassed the high end of the forecast published in its Q3 earnings report by 10%. While Kohl's performance in the fourth quarter of fiscal 2017 was exceptionally strong, even a smaller sales beat this quarter could drive Kohl's EPS above its guidance range.

Second, free cash flow remains far above net income at Kohl's. Through the first three quarters of fiscal 2018, Kohl's has generated $965 million of free cash flow (excluding capital lease payments) -- up more than $600 million year over year. Some of the increase relates to the timing of payments for inventory purchases, but Kohl's still is on track to surpass last year's free cash flow of $1 billion by a wide margin.

Third, Kohl's is in the early innings of its effort to reinvigorate store traffic. As it scales up its partnerships with other brands, brings high-traffic tenants next to some of its stores, and rolls out a new loyalty program, its sales momentum should strengthen further.

While Kohl's stock still trades for 12 times its projected 2018 earnings -- a premium to some of its department-store peers -- that works out to a very modest seven or eight times free cash flow. Moreover, there's plenty of room for future earnings and cash flow growth, which could eventually send the stock rocketing to new highs.