Although the bulk of chip giant Intel's (INTC -1.96%) revenue comes from sales of processors for personal computers and data centers, the company's smaller Internet of Things Group (IoTG) is profitable -- and it's growing. Here's what the unit does, according to the company's most recent annual filing:

IOTG develops and sells high-performance Internet of Things compute solutions for retail, automotive, industrial, and video surveillance, along with a broad range of other embedded applications. 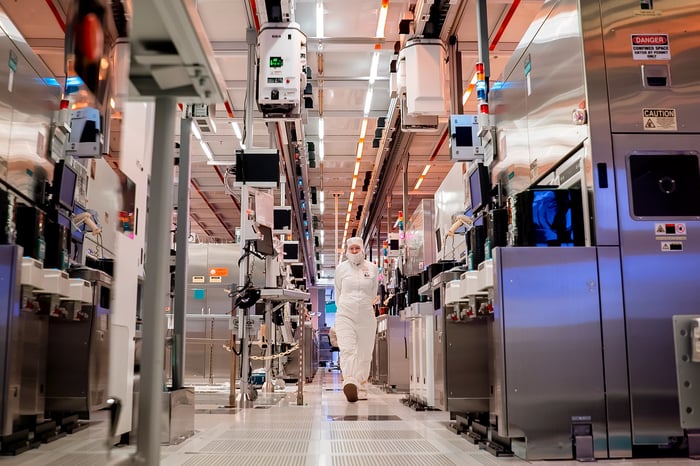 IoTG boss Tom Lantzsch recently presented at the UBS Global Technology Conference. Here are some of the points worth highlighting from that presentation.

Sorry for the pain, customers!

During Intel's most recent earnings call, CFO and interim CEO Bob Swan admitted that the company wouldn't be able to fully meet the demand for its processors -- a situation that's led the company to boost its spending on production capacity this year, and will mean an even bigger boost to logic chip-related spending in 2019.

"Within our CPU product lines, we're prioritizing the production of our Xeon and Core processors so that we and our customers can serve the high-performance segments of the market," Swan said. As a result, "[due] to supply constraints, we anticipate IoTG revenue will be down approximately 15% sequentially."

During the conference, Lantzsch said that he had "just returned from both China and Taiwan over the last month meeting with all our customers, ... [and] again, I apologize for the pain we're putting them through right now."

He did make sure to clarify that "this is not a demand-driven issue, this is a supply driven issue."

"So, nothing underlying in our business that we think is going to be impacted by this shortage, despite the pain that it's putting our customers through in the short term," the executive added.

It's not just cheap chips

"Most people don't realize that the average ASP of my product is greater than $100," Lantzsch revealed. He noted that some "think about [Internet of Things] in small little devices, that's not where we play." To drive that point home, he noted that the second-largest share of revenue generated by IoTG comes from Intel's high-performance, data center-oriented Xeon processors. And in 2017, sales of Xeon processor-based solutions were the unit's fastest growing.

"So, again, it's not about Atom-based devices, although that's part of my portfolio," Lantzsch explained. (Atom is Intel's low-performance/low-power processor line.)

In the past, Lantzsch said his segment was "just taking existing technology and applying it to verticals" -- but that is going change. IoTG has "four custom chips under way in various forms ... we always try to leverage the main compute technology of the rest of the corporation."

Expanding on this, Lantzsch noted that many of Intel's offerings consist of two chips. The first chip contains the main computing elements (the CPU cores, graphics processing units, and so on) while the second is a platform controller hub -- PCH for short. Generally speaking, Intel's Core and Xeon products have distinct processing and PCH dies, while the Atom-based products these days integrate all of those functions into a single piece of silicon.

"So, we can take the main core CPU die that we may use for a computer ... but we can create differentiated silicon to my partners or my customers by doing these customized PCH chips," Lantzsch elaborated.

He also talked about how the company is doing "customized work with regards to acceleration technology through Movidius where we're now being very focused on not only the camera, but equally as important, on the edge and how we accelerate that." (On Sept. 5, 2016, Intel announced its acquisition of Movidius, a company that created low-power, high-performance, system-on-a-chip platforms to accelerate computer vision applications.)

"So, I think we're a business in transition to do more differentiated products where it economically makes sense, and leverage the core assets of the corporation," he concluded.