The e-commerce giant's stock is still having a good year, but it's down 26% from its all-time closing high set in early September.

Let's look at what's driven Amazon stock up -- and down -- this year. 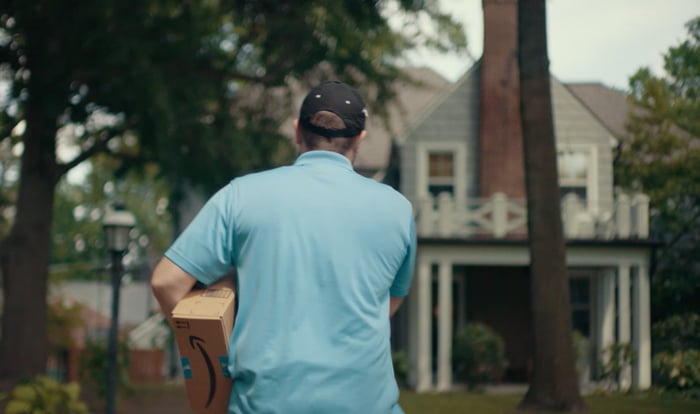 Amazon stock's rise throughout much of this year has been powered by the company posting strong quarterly results. Since the fourth quarter of 2017, the e-commerce titan has been crushing Wall Street's earnings estimates and its own operating income guidance. 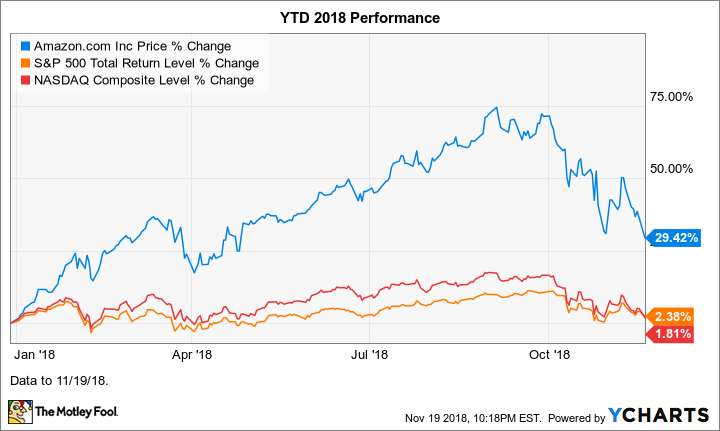 The two big themes for both the first and second quarters were the North America segment's torrid operating-income growth and Amazon Web Services' increasing profitability. This narrative continued in the third quarter, whose results were announced on Oct. 25. In that quarter, revenue grew 29% year over year to $56.6 billion, operating income increased more than 10 times to $3.7 billion, and EPS soared 1,006% to $5.75. Once again, the company breezed by its operating income outlook and the Street's EPS projection, of $1.4 billion to $2.4 billion, and $3.14, respectively. Moreover, operating cash flow -- which is the primary metric that Amazon aims to optimize -- rose 57% year over year to $26.6 billion for the trailing 12 months.

This time, however, there was one notable change: Amazon stock sank 7.8% the day after Q3 earnings were released, whereas it popped after results for the prior two quarters were announced. The culprit: disappointing Q4 guidance.

Since hitting its all-time closing high on Sept. 4, Amazon stock has dropped 25.9%. We can attribute this sharp decline to the downturn in the overall market and to the company's fourth-quarter outlook falling short of Wall Street's expectations.

Tech stocks have been particularly hard hit during this market decline, as evidenced by the tech-heavy Nasdaq falling 12.7% since Oct. 1. Popular and highly valued tech stocks have taken the brunt of the beating. Shares of Amazon's fellow FAANG members, Facebook, Apple, Netflix, and Google parent Alphabet are also down significantly since October, as the following chart shows. 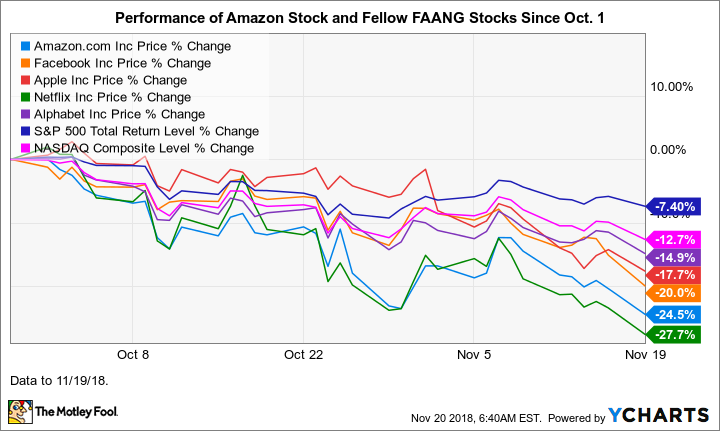 Shares of Amazon were already down considerably in October when they got whacked on Oct. 25 after the company released fourth-quarter guidance along with its third-quarter results. The company guided for revenue of $66.5 billion to $72.5 billion, representing growth of 10% to 20% year over year. It expects operating income of $2.1 billion to $3.6 billion, representing growth of 0% to 71%. The revenue outlook falls quite a bit short of the $73.9 billion Wall Street was expecting, and while analysts don't provide estimates for operating income, it's safe to assume that market participants were disappointed that Amazon left open the possibility that operating income growth could sputter out significantly or even stall completely in the fourth quarter.

Investors can almost bet the bank that Amazon's fourth-quarter results won't be as robust as its results for the first three quarters of the year. That's largely because the third quarter was the last quarter in which the company's year-over-year revenue growth will get a boost from the Whole Foods acquisition, which closed in August 2017. However, since Amazon has been crushing its operating income guidance all year, it seems likely that its Q4 outlook is quite conservative. 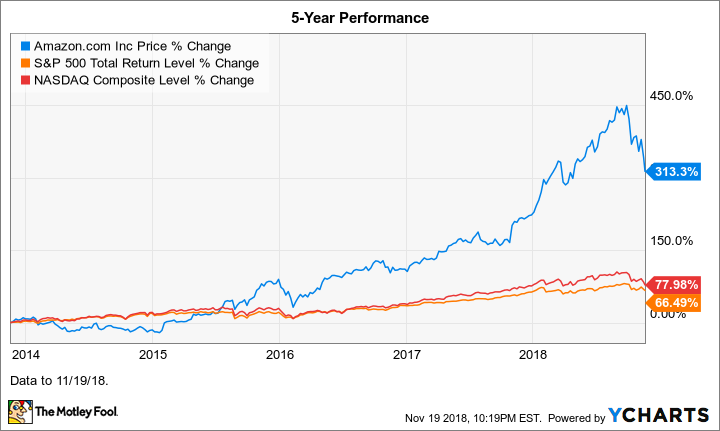 Certainly, investors who bought Amazon stock near or at its all-time high during the late summer are feeling some pain. But investors should keep things in perspective. The stock is still a big winner in 2018 and is a humongous winner over longer periods, as the preceding five-year chart shows. And it's come roaring back from greater percentage losses than 26%.

Moreover, for investors with some money sitting on the sidelines, Amazon stock is looking more attractive from a valuation standpoint  than it has in quite some time. That said, tech stocks may not be done selling off, so it's probably a better idea to monitor Amazon stock closely rather than buy it right now.