Please ensure Javascript is enabled for purposes of website accessibility
Log In Help Join The Motley Fool
Free Article Join Over 1 Million Premium Members And Get More In-Depth Stock Guidance and Research
By Asit Sharma – Updated Nov 22, 2018 at 8:08AM

Maybe this pop-culture licensing company is too volatile to appreciate over the short term.

Shares of Funko (FNKO -3.43%) have lost roughly 22% of their value since the company released third-quarter 2018 earnings on Nov. 8. But shareholders presumably are taking this movement in stride, as Funko has exhibited dizzying volatility in the year since its IPO on Nov. 2, 2017. Another reason to hang on: The pop-culture licensing specialist's stock is still 134% to the positive year to date.

In its quarterly filing, the company reported strong top-line growth and raised full-year revenue and earnings estimates. However, as my fellow Motley Fool Rich Smith points out, concerns over gross margin were among the factors affecting market reaction to the earnings release.

Could shares be in for additional leaps and pratfalls over the next several quarters? Most certainly. But if you have the patience to hold the FNKO symbol for years rather than months, I offer five reasons to appreciate the stock and look beyond its current volatility.

Funko describes itself as being "channel agnostic," and while its goods are found on the shelves of major retailers like Walmart (WMT 0.96%) and Target, they're also available online, in specialty shops, at dedicated fan conventions, and now even in unexpected venues like Foot Locker, which is seeking to create its own pop-culture revenue stream. As of this latest report, no outlet makes up more than 10% of the company's year-to-date sales.

Perhaps this will change in the near future, as Walmart is shifting Funko merchandise from its toy section to its DVD and entertainment section, and providing the company with displays ranging up to 20 feet. In terms of placement and sheer square footage, this is a choice real estate upgrade, as the image below demonstrates: 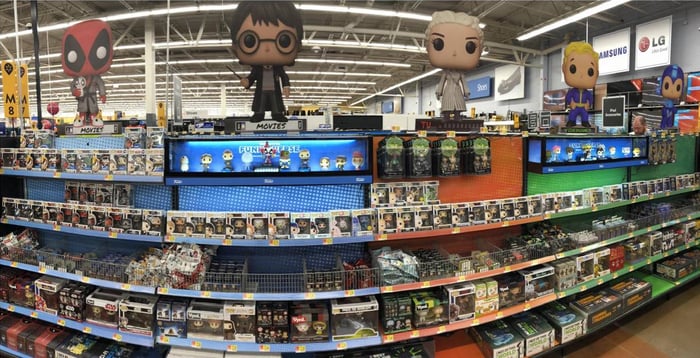 During Funko's third-quarter earnings conference call, management said that Walmart accounted for between 5% and 6% of total revenue. And while this percentage will rise over the next few quarters, it's unlikely to evolve into a deep concentration overnight. Funko's customer balance provides a wide and relatively safe platform for future growth.

Management tracks several metrics related to the company's properties, i.e., the intellectual-property licenses that permit it to create and sell physical products based off TV shows, video games, movies, and other pop-culture media. The company ended the third quarter with a year-over-year increase in active properties sold, from 400 to 553.

Investors may benefit from tracking the mix of new and evergreen properties throughout each year. Evergreen properties are defined as "back catalog content that is not tied [to] a current movie, video game, or TV show." In the third quarter, 53% of sales derived from evergreen properties. And for the last two quarters, Funko's top-selling property has been an evergreen title: Harry Potter.

The distribution between new and evergreen properties supports management's assertion that Funko doesn't rely solely on the latest pop-culture trends to expand revenue, and that it actively avoids creating too high a concentration in any single hit product.

Two other metrics also provide evidence of the company's diversified property portfolio. During the last three months, Funko's top 10 properties accounted for just over one-third of company sales, and no single property generated more than 7% of sales.

3. Funko is investing to reduce its Pop! concentration

While diversification of customers and properties is laudable, the company does have one concentration for investors to fret over. Pop! collectible vinyl figures, the product most people are likely to associate with Funko, accounted for 76% of total sales in the first nine months of 2018, after making up 70% of sales in the prior-year period.

Pop! figures have been the company's economic engine for several years, and management has every incentive to increase these sales. Yet Funko has recently expanded into new lines including backpacks, handbags, clothing, candy, and tchotchkes. Funko acquired California-based fashion accessories specialist LoungeFly in 2017 to create more fashion-based properties. Management's proactive efforts should reduce the proportion of Pop! sales to total sales in the next few years.

4. Global expansion from a U.K. beachhead 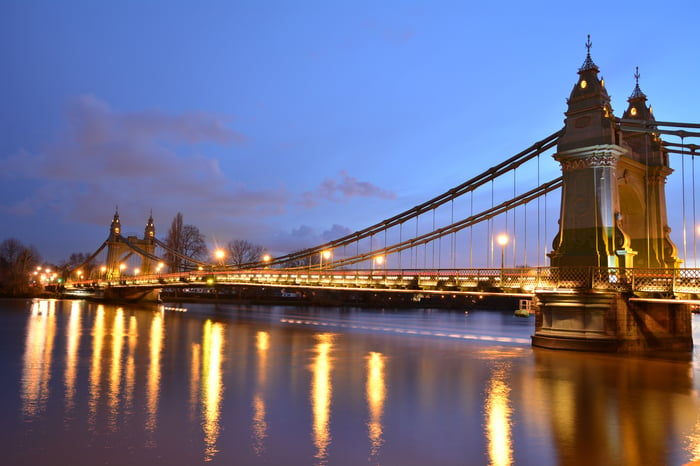 Hammersmith Bridge over the Thames. Funko has its  European headquarters in the Hammersmith neighborhood of London. Image source: Getty Images.

Non-U.S. revenue is turning out to be a muscular source of expansion. International sales jumped 44.1% during the third quarter against the prior year and accounted for 31.4% of total sales. This improvement was fueled by Funko's European sales, which have jumped 73% during the first nine months of 2018 against the prior-year period, the result of a new and dedicated focus on Europe. Funko formed its European subsidiary, Funko U.K., in late 2016 in connection with its purchase of London-based Underground Toys in January 2017.

Since then, the company has installed a new enterprise resource planning system and has configured a distribution network of third-party logistics carriers, both in the service of handling a higher sales capacity. In the third quarter, Funko expanded distribution to 1,600 new points in the EMEA region (Europe, the Middle East, and Africa) and placed products in 1,100 new stores in Latin America.

During Funko's earnings conference call on Nov. 8, CFO Russell Nickel noted that the company had saved roughly 300 basis points of interest via the refinancing. These 3 percentage points of interest expense will save Funko $1 million in interest in the fourth quarter, and an average of $6.8 million annually over the next five years.

Most of the five-year interest expense reduction of nearly $35 million will be realized as cash savings. By my rough calculation, this frees up yearly capital equal to one-fourth of the company's current annual operating cash flow. That's a significant chunk of cash, which can be plowed back into properties acquisition, research and development, marketing, and other value-creating spends. It's also another solid reason to like Funko over the long term.