Please ensure Javascript is enabled for purposes of website accessibility
Log In Help Join The Motley Fool
Free Article Join Over 1 Million Premium Members And Get More In-Depth Stock Guidance and Research
By Daniel B. Kline - Nov 21, 2018 at 4:36AM

Many retailers are racing to grab a piece of the defunct chain's market share, and the winners so far are the ones that went big.

Before it closed its doors, Toys R Us rang up about 19% of the $20.7 billion worth of toys sold in the United States, according to some estimates. That's more than $4 billion in business up for grabs, and about 40% of those purchases take place during the holiday season.

Naturally, with that kind of money on the table, a whole lot of retailers are looking to get in on the action. J.C. Penney added robust toy sections to all its stores, while Walmart (WMT 0.08%) and Target (TGT 2.46%) expanded their offerings, and increased the space they devote to toys during November and December.

Beyond that, Barnes & Noble offers a toy section, Kroger has actually partnered with the remnants of the bankrupt chain to offer Toy R Us-branded toy sections in some of its stores, and Party City is opening pop-up Toy City stores for the season -- some of them in former Toys R Us locations. Then, of course, there's the elephant in the room -- Amazon (AMZN 3.58%), which printed its first-ever toy catalog in advance of the holiday season.

That's a crowded field, but some winners have already started to emerge, according to a new survey from Criteo. 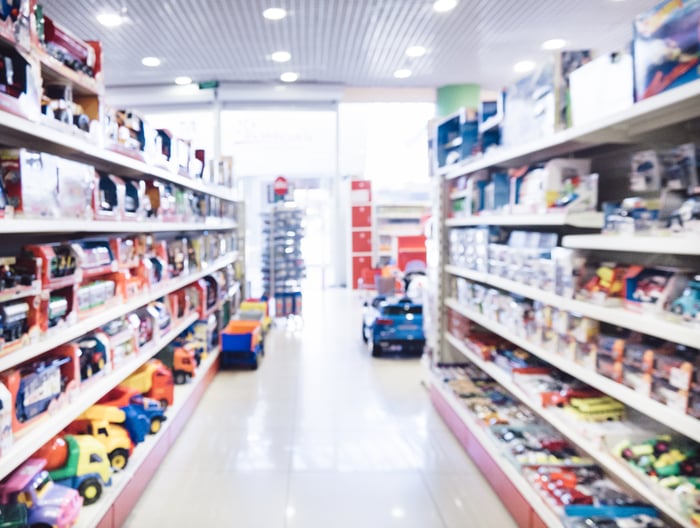 Walmart and Target have stepped into the void left by Toys R Us.

These are the winners

The clear winners, according to the survey, are Amazon, Walmart, and Target. In the e-commerce realm, Amazon is the unsurprising top choice for former Toys R Us and Babies R Us shoppers, but it's followed closely by Walmart.com and Target.com.

Brick-and-mortar stores, however, aren't being shut out: 59% of former Toys/Babies R Us shoppers said they've recently made purchases of items they'd previously have gotten from those chains in physical stores.

And convenience remains a major factor: About two-thirds of former Toys/Babies R Us shoppers had a store within 20 minutes from their home. Within that group, 78% prefer shopping at Walmart or Target, among the 55% of respondents who said they don't care about location,  Amazon lead the pack as the favored replacement retailer.

"One of the great joys of shopping at Toys R Us & Babies R Us was the incredible level of assortment that would expand the planned holiday purchase," said Publicis Media Executive Vice President Amy Lanzi in a press release. "Target and Walmart are working hard to create meaningful experiences that encourage basket-building discovery moments at their stores, and online, that fit the varied price and convenience expectations of today's holiday shoppers."

U.S. consumers still desire an immersive in-store toy experience, and Walmart and Target come the closest to delivering that. They may not be pure toy stores, but both offer impressive selections which they have expanded since the demise of Toys R Us. And that's giving them a notable edge over rivals including J.C. Penney, Kroger, Barnes & Noble and Party City, with their more selective offerings.

Amazon, of course, lacks a physical presence, but it has a near-total selection and a massive built-in customer base of Prime members.

This data suggests that the market could support a revived Toys R Us if it's a true toy destination. In the absence of that, though, Walmart and Target have proven to be close enough while everyone else is just dabbling.