How long could it last? History has some clues.

The stock market has had a rough couple of months, with the S&P 500 (^GSPC 3.06%) index closing on Nov. 23 down more than 10% from its all-time highs in late September. That qualified for what most market watchers officially call a correction, and although such downward moves have been few and far between during the bull market of the past 10 years, the current correction marks the second just in 2018.

The question on many investors' minds is how long the current stock market correction will last. Historically, corrections have tended to come quickly, with the worst losses coming within just a few months. In fact, the current correction is already longer than the downward move in early 2018, and approaching the length of the 2010 market correction, which was the first break in the huge upward move in the S&P 500 following the end of the financial crisis. 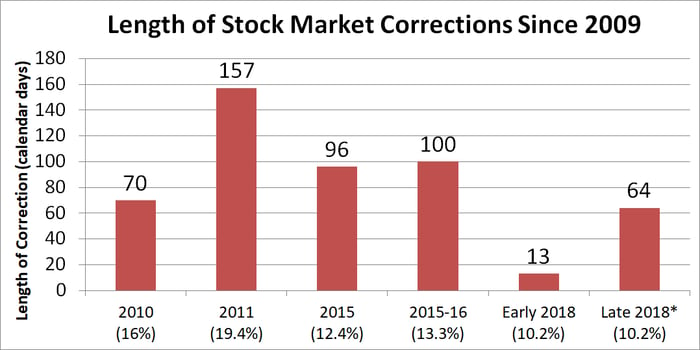 Of course, after the market hits bottom, it takes time to recover. But the S&P 500's track record on this score has been impressive as well. In 2010, stocks hit new highs before the end of the year, and even after 2011's large correction of almost 20%, the S&P was back at record levels by 2012. Similar patterns showed during 2015-16 and earlier this year.

The one warning about the current downturn to keep in mind is that if problems snowball into a full-blown bear market of 20% or more, it could take a lot longer to rebound. During the run-up to the financial crisis in late 2007, it took almost a year and half for stocks to hit bottom, and the bear market of 2000-02 took two and a half years.

Even so, the long-term takeaway to remember is that although corrections are inevitable, stocks have always managed to recover to new highs given enough time. Often, that time hasn't been as long as you would've thought -- even if it seemed like forever while you were going through the downturn itself.