Understanding what a bellwether metric really means to the organization.

Restaurant operator Dine Brands Global's (DIN 0.18%) third-quarter fiscal 2018 earnings report was notable for improved year-over-year performance across a range of vital financial metrics. If you remove the massive $532 million impairment charge Dine Brands took against Applebee's assets in the comparable third quarter of 2017, then on an apples-to-apples basis, the company's total operating margin increased by roughly 1.5 percentage points this quarter. Operating cash flow has approximately doubled in the first nine months of this year against the prior-year period, to $62 million.

In addition, a headline number touted by management attracted attention from investors in this most recent quarter -- a 7.7% year-over-year increase in Applebee's comparable-restaurant sales. For context, comps in Dine Brand's second major business, its IHOP restaurant chain, expanded by a moderate 1.2% during the quarter.

Applebee's is enjoying a renaissance this year against its loss-generating 2017. Higher comps, coupled with the chain's climbing operating performance, have injected helium into the parent company's shares, which lost 50% of their value between 2015 and 2017. If you haven't followed Dine Brands closely in 2018, please take notice: 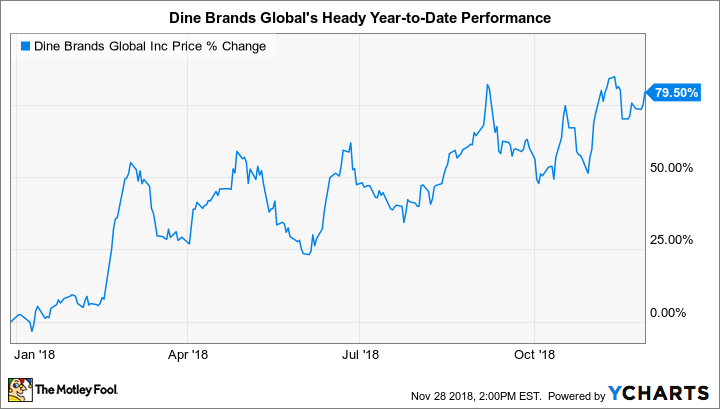 Digging into a comparable-sales revival

Management reports that part of Applebee's comps resurgence is being driven by higher traffic stemming from its "guest-centric" strategy, which entails a return to more traditional value-menu offerings that appeal to the company's core customer base. It also involves upgrading technology in restaurants to improve the order experience and the collection of guest data to personalize offers and incentivize traffic via Applebee's loyalty program.

But the comparable-sales narrative is a little more complex than this overview implies. Comps decreased by 7.7% in the third quarter of fiscal 2017. Thus, Applebee's faced a relatively easier comparison hurdle in its most recent quarter.

In addition, the base of comparable units has changed materially since last year. Applebee's has closed a number of its worst-performing stores over the last year, effectively removing some negative pressure from its comps calculation: Thus, while improved traffic certainly is buttressing sales, both the easier prior-year comparison and the removal of weak stores from the comps base contributed to that healthy 7.7% comps advance. 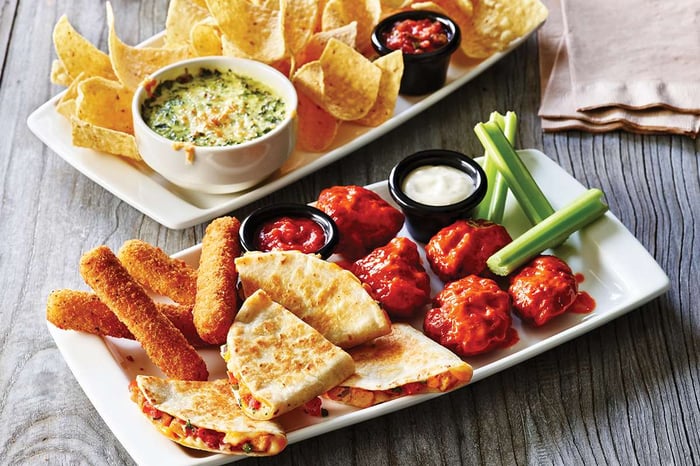 Does this mean that investors should be suspect of Dine Brands' third-quarter performance? On the contrary.

Further, without the decommissioning of 5% of Applebee's store base, it's unlikely that the company would have realized the margin and cash-flow improvements mentioned above. And both franchisees and Applebee's management can now devote more time and resources to better-performing locations. Comps are the incidental beneficiary of killing the worst-performing restaurants in the Applebee's system.

The culling continues, as Applebee's plans to close another 15-20 stores (net) between domestic and international units in the fourth quarter. In addition, Dine Brands also will purchase 69 Applebee's restaurants in North and South Carolina from a franchisee in the fourth quarter, with the goal of improving operations and refranchising the units at a later date.

Restaurant turnarounds in the fast-casual space are quite difficult to pull off, with numerous opportunities for failure. Suppose management had ignored loyal customers' desire for a return to menu innovation rooted in value offerings and promotions. It's unlikely in that case that Applebee's would have rebooted so quickly -- even with a lift from multiple unit terminations.

With closures mostly behind it, Dine Brands Global is focusing on new sales enhancements, including a push to lift off-premises dining. Currently, off-premises sales (mostly in the form of takeout) comprise 10% of Applebee's annual business.

Both Applebee's and IHOP have recently signed nationwide partnerships with delivery platform DoorDash, and Applebee's believes this new relationship will boost its catering business, as well as delivery. Management projects a doubling of off-premises revenue to 20% of Applebee's top line in the next few years.

Apparently, it's easier to plot initiatives for growth once you've extinguished the fires in your profit and loss statement.

Here's the Restaurant That IHOP's Parent Should Acquire
397%