Holiday shopping creep hasn't hurt Black Friday or Cyber Monday -- at least, not when it comes to online sales. Though many retailers now begin offering their seasonal sales on Nov. 1, consumers continue to spend big during the traditional Thanksgiving-weekend surge.

"Black Friday will come very close to eclipsing last year's Cyber Monday in terms of online sales," he said in a press release. "...While some Americans might have been waiting in lines at stores today, the data suggests that at least some of them joined their peers in shopping on their phones -- and buying more than they did in years past." 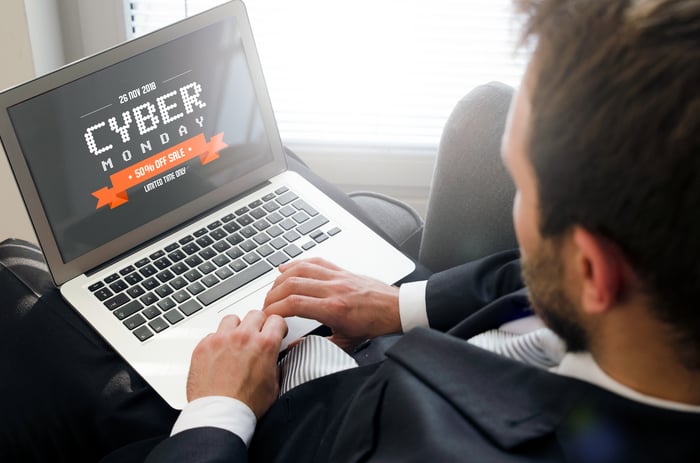 It's important to remember that e-commerce sales are growing -- and will almost certainly post bigger gains than brick-and-mortar sales during this year's holiday shopping season -- but they're still only about 19% of the total. Digital sales for the final two months of the year are expected to rise about 15% in 2018, according to Adobe data, to $124.1 billion. Total holiday season sales are forecast to land between $717 billion and 720.89 billion, according to pre-holiday season projections from the National Retail Federation.

The Adobe numbers, however, show that digital sales growth exceeded that 15% overall forecast and topped the specific projections for all three key shopping days: Thanksgiving, Black Friday, and Cyber Monday. Thanksgiving digital sales came in at $3.7 billion, up 27.9% over 2017. Black Friday sales hit $6.2 billion, up 23.6% year over year, and Cyber Monday's sales grew by 19.3% to $7.9 billion.

What does this mean for brick-and-mortar?

Some of that $1.3 billion likely came from brick-and-mortar retailers' e-commerce operations, though it's possible that sales at physical stores beat expectations as well. The reality is that while (mostly) pure digital Amazon probably gained at the expense of traditional stores, the big retail winners are the ones that have embraced an omnichannel model. That's backed up by Adobe's data.

The retail losers are those chains that have yet to adapt. Consumers have become accustomed to getting what they want, precisely when and where they want it. More and more often, that means they demand the ability to order online and pickup in-store, or shop in a brick-and-mortar store for home delivery, or use some other non-traditional method.

The growth of digital sales is almost certainly going to leave many retailers who have clung to an outdated physical-first model falling further behind. That long-term trend shows no signs of slowing -- but it doesn't mean brick-and-mortar stores will disappear. Instead, the deeper patterns show an evolution taking place, with retailers' physical locations becoming part store, part showroom, part shipping warehouse, and part customer service center.