It's been an up-and-down year for MedMen Enterprises (OTC:MMNFF). Shares of the marijuana retailer more than doubled by mid-October. But then MedMen stock plunged, giving up all of its year-to-date gains and then some.

MedMen announced its fiscal 2019 Q1 financial and operational results after the market closed on Thursday, Nov. 29, 2018. There were five things you should love from the company's update -- but one thing that was concerning. 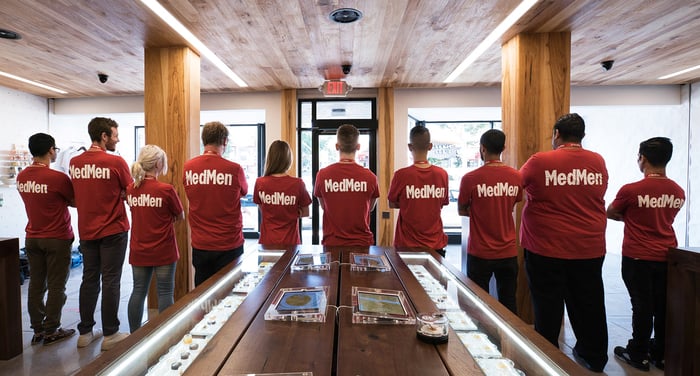 The best news of all for MedMen in its fiscal first quarter ending Sept. 30, 2018, came on the top line. MedMen reported revenue of $21.5 million, a whopping 1,094% jump from the prior-year period.

This tremendous year-over-year growth came primarily from MedMen's launch of seven new retail stores over the last 12 months. The company also benefited from a strong performance in the California market, where eight of its 14 cannabis dispensaries (as of the end of September) are located.

There was an issue in fiscal Q1 that held quarter-over-quarter revenue growth to only 4.4%, though. California experienced a supply shortage across the state in July which also extended into August. The problem was resolved by late August, but it still dampened MedMen's revenue somewhat in the quarter.

This figure reflected a small decline from the $6,541 in sales per square foot achieved in the previous sequential quarter. However, MedMen still is handily beating some of the most successful retailers in the world on the key metric, including Apple and Tiffany & Co.

California has by far the biggest legal marijuana market in the U.S. But the number of retail locations in the state is still well below what it could -- and should -- be. Despite this lower number of retail dispensaries and the highly fragmented industry, MedMen claims a solid market share in the key California market.

The company stated in its fiscal Q1 update that its stores generated around 5.3% of total legal retail sales of cannabis and cannabis products in California based on data published by the California Bureau of Cannabis Control. That's an impressive market share, especially considering that MedMen's stores represent only around 2% of the total number of licensed dispensaries in the state.

4. Nice additions to the MedMen team

MedMen also announced some new members joining its team in its quarterly update. The changes announced occurred both during the quarter ending Sept. 30, 2018, as well as afterwards.

Ben Cook was named chief operating officer on Oct. 9, 2018. Cook's experience includes leading supply chain activities with Apple and Sam's Club, which is owned by Walmart. The company hired Clarence Foster as senior vice president of human resources on Oct. 16, 2018. Foster claims more than 20 years of experience across multiple industries, including working with Nissan and L'Oreal.

5. Major sales growth on the way

MedMen didn't provide any guidance for future quarters. The company didn't predict higher revenue in the coming year. But it didn't have to. Thanks to several acquisitions that MedMen highlighted in its quarterly update, major sales growth is virtually assured.

In addition, MedMen has made several other smaller deals. It announced acquisitions of dispensaries in Illinois and California. The company also is gaining control of Kannaboost Technology and CSI Solutions, which have operations in Arizona.

But one big concern

The major downside in MedMen's update, though, was its bottom line. MedMen posted a net loss in fiscal Q1 of $66.5 million, or $1.42 per share. That's an improvement from the $78.7 million loss, or $1.95 per share, reported in the previous sequential quarter. However, it was much worse than the $5.3 million loss from the prior-year period.

MedMen isn't likely to reach profitability anytime soon. That means the company will need to raise more money down the road. MedMen ended its fiscal first quarter with cash and cash equivalents of $63.5 million. The company closed a $77 million senior secured term loan in October. It also announced a $56 million bought-deal financing transaction in November.

But at the rate that MedMen is burning through cash, the company will likely have to go to the well again at some point in 2019. If more stock offerings are coming, that could be bad news for investors that outshadows the positives for the company.

Editor's note: A previous version of this article stated that MedMen will have licenses for 67 retail stores following the acquisition of PharmaCann. The article has been updated to reflect the correct number of 69 stores. The Fool regrets the error.