Snap (NYSE:SNAP), the parent company of Snapchat, is looking to boost sales and engagement in its social media app with the recent launch of its Lens Creative Partners program. The program allows brands to find individual developers and augmented reality (AR) shops that can create branded lenses (filters that overlay an image or text over what a user takes a picture or video of) for Snapchat.

In a blog post, Snap mentioned the program should "lower the barrier for brands to create and run sponsored AR" in Snapchat. The company also said the developers and companies are certified to create the AR lenses, adding:

"To be certified, creators had to be experienced in developing quality AR and complete a rigorous course about the development process, creative best practices, ad policies and buy models of sponsored AR Lenses on Snapchat." 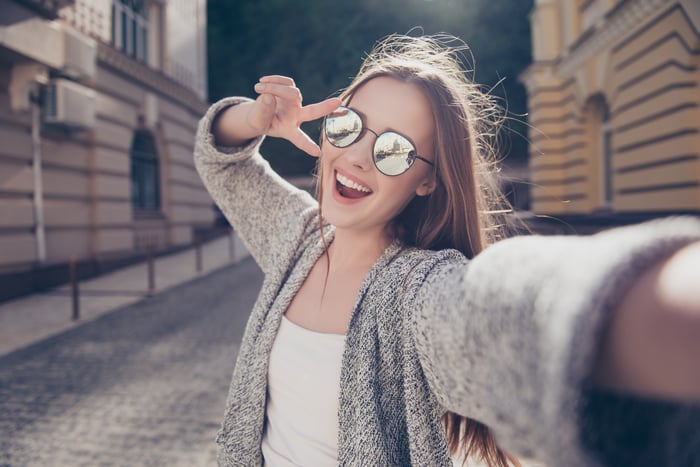 It's not surprising that Snap wants to make it easier for brands to create AR lenses. Augmented reality filters are one of the key ways Snap built its business, and it's still one of the most engaging parts of the Snapchat app.

But the bigger storyline here is that Snap is desperate to find ways to get its users to continue engaging with the app, because the company has seen its daily active users (DAUs) decline for two straight quarters.

Snap is trying to stop the user losses

Snap is still a young company, so seeing daily active users slip for two straight quarters is a troubling sign. The company is looking to its AR lenses as a way to increase revenue, but also trying to increase engagement so that more users don't walk away from the app.

The company said earlier this year that 40% of Snapchat users play with AR experiences every day for an average of three minutes per day. With the new Lens Creative Partners program, Snap is trying to get more AR lenses in front of users to avoid losing even more users in subsequent quarters.

The new Lens Creative Partners program isn't going to turn around Snap's business, and the company knows that. But Snap is likely looking at everything it can do to help keep its users from straying -- and considering that its users already spend significant amounts of time with AR, the latest move makes sense.

Investors need to look at the bigger picture here and keep a very close eye on Snap's daily active user numbers. It's already a red flag that the company reported two consecutive quarters of DAU drops, and any more would be very worrying news.

Snap's share price has tumbled over the past several weeks along with the prices of most tech stocks as investors have worried about trade wars and rising interest rates. But Snap's 50% share price drop has also been caused by the company's inability to grow its user base. There's no easy fix to Snap's user problem, particularly as it faces very stiff competition from Facebook's Instagram. More AR may be a step in the right direction -- but it's a tiny step on an extremely long path.