Please ensure Javascript is enabled for purposes of website accessibility
Log In Help Join The Motley Fool
Free Article Join Over 1 Million Premium Members And Get More In-Depth Stock Guidance and Research
By Daniel B. Kline - Dec 2, 2018 at 5:00PM

If you have to get your friends to become salespeople, too, it's probably a terrible idea.

Most people have that friend who's always selling something. They have parties where the sole goal is getting you to leave with a whole lot of whatever they're peddling now. That might be yoga pants, knives, adult toys, children's books, makeup, and who knows what else.

There's nothing wrong with people hustling for money. Some of these companies offer opportunities for stay-at-home-parents or other people who need a flexible schedule to earn some cash.

However, it becomes a major problem -- and often a scam -- when a company's real model isn't its partners being direct-to-consumer salespeople, but when their main goal is recruiting salespeople under them. Called multilevel marketing, this model promises huge returns, but it generally ends in disappointment. 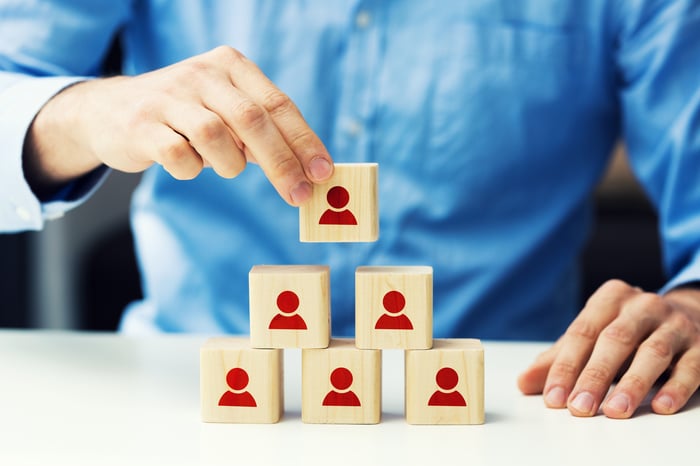 If it looks like a pyramid scheme, it probably is. Image source: Getty Images.

When you consider working for any sales-based organization, you need to consider a few important things. First, how does the company make its money? You want an organization that profits when you make a sale. Ideally, you won't have to carry any inventory beyond a demonstration kit, and the company will ship directly to your customers.

In that situation, the company only succeeds when you make a sale. That's a solid model that comes with limited risks.

There are two other models that you should avoid (and some particularly sleazy companies combine them both). The first is a company that forces its partners to carry a lot of inventory that can't be returned. In this case, the company profits even when its salespeople end up with unsold inventory.

The second case -- and this is the real scam -- is when a company tries to get you to build a sales organization with the promise of getting a cut of the sales of all of the people under you. In many cases, these companies charge significant franchise fees and require people to make big inventory investments.

Sometimes, the first person in makes some money, but it comes at the expense of their friends losing money. Even if the product is legitimate, consider whether you really can expect a bunch of your friends to succeeding at selling it.

If it appears too good...

There's no such thing as a free lunch, and there's no easy money. Making sales is difficult, and most people aren't very good at it. Be very wary of any business model that relies on you selling products to people you know, and run like hell from any model that requires you to sign up more salespeople in order to profit.