A lot happened in the markets in just four years.

President George H.W. Bush passed away on Friday, Nov. 30, at the age of 94. World leaders across the globe have spoken out in praise of the former president's accomplishments, while many across the U.S. have emphasized his dedication to serving his country.

From an investing standpoint, Bush's presidency faced its share of challenges, yet it also stands as a reminder of the resiliency of the financial markets. When the 41st president of the U.S. first took office, the stock market was still in the process of recovering from the crash of 1987. During Bush's first year in office, the S&P 500 (^GSPC 2.02%) managed to climb back to all-time highs, completing a two-year rebound that surprised even the most optimistic of market participants.

Yet Bush also faced the biggest geopolitical test of the decade when Iraq invaded Kuwait in 1990. That prompted decisive action from the commander in chief, amassing a coalition of global powers to push Iraqi forces back northward successfully. But Iraq's aggression and the subsequent Operations Desert Shield and Desert Storm sent oil prices soaring from the midteens to more than $40 per barrel, and the already fragile U.S. economy fell into recession.

Despite economic challenges, the stock market once again recovered quickly, reaching new highs again shortly after the halfway mark in the Bush presidency as oil prices returned to pre-war levels. In the end, the 41st president's term saw the same number of all-time highs for the Dow Jones Industrial Average as his son's presidency -- despite it being just half the length of time. 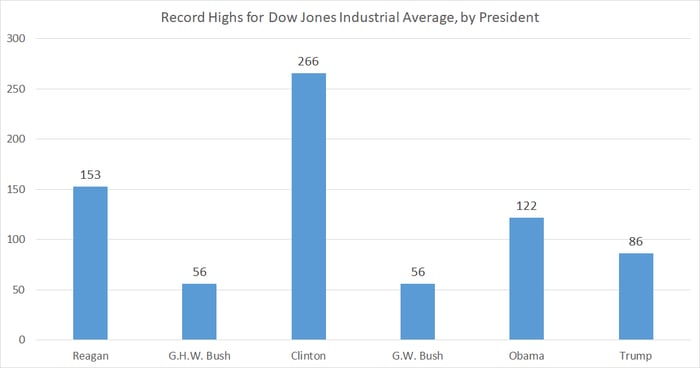 Even with plenty of volatility along the way, investors who stayed in the market throughout Bush's single term saw average annual percentage returns in the double digits, sustaining the S&P 500's long-term historical performance.

Investors had to endure plenty of ups and downs during the George H.W. Bush administration. However, the lasting accomplishments the 41st president achieved set the stage for a decade of prosperity and innovation. Learning that the U.S. can survive and thrive through the most difficult of conditions is a lesson that those who lived during the Bush presidency learned well, and it's still a critical lesson today.