Please ensure Javascript is enabled for purposes of website accessibility
Log In Help Join The Motley Fool
Free Article Join Over 1 Million Premium Members And Get More In-Depth Stock Guidance and Research
By Rich Duprey - Dec 3, 2018 at 8:16AM

Despite gains, the cloud storage leader has disappointed investors.

Cloud storage leader Dropbox (DBX -5.82%) went public in March in what was at the time the biggest tech IPO since Snap's debut the year before. Share started at $21, comfortably above the $18 to $20 range that was predicted, and closed out trading that first day 36% higher.

But it's mostly been downhill since, aside from the big spike shares saw in June after the company said it could improve on its already impressive storage technology. The gains were short-lived, and the stock has tumbled 45% from those highs.

After about nine months in the public markets, let's see why Dropbox shares are up only a little over 10% this year -- better than the performance of the S&P 500 index, but a disappointment for a stock that had so much promise at the start. 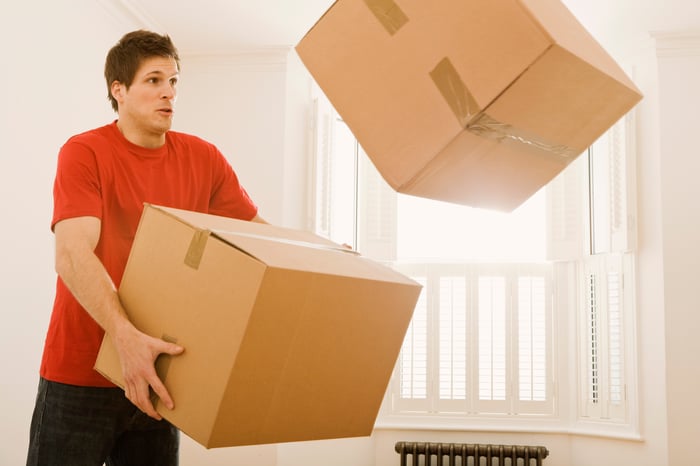 A rich premium even for a sound business

Dropbox has the premier content platform in cloud-based storage. Today it has over 500 million registered users and over 12 million paying ones, and analysts see it being able to convert as many as 300 million of those users into paying ones over time. That kind of expansion could serve to drive its user costs dramatically lower, while widening its gross margin.

That's the kind of growth story investors typically like -- but it may already be priced into the stock, which trades at 55 times this year's earnings and seven times sales. Although the company does produce copious amounts of free cash flow, some $329 million on a trailing basis, when compared to its $8.96 billion enterprise value, that gives it a very rich free cash flow-to-enterprise value multiple of 27, a lot to pay for a stock whose earnings are expected to grow at a 17% annual rate for the next five years.

Yet Dropbox's business does appear sound, and most of the forces pulling its stock down for most of the year don't seem to have much to do with its actual operations. Rather, it has been hit by news of prominent investors like George Soros and Jana Partners selling off all their shares, along with the expiration of the lockup period during which long time shareholding insiders were finally able to cash in on their investments.

More recently, Dropbox's COO announced his resignation, though he said he was staying around till the end of the year to help with the transition. These aren't issues that spell trouble for the business, though, and shouldn't really be a concern to investors.

What might be more worrisome was the revelation that Dropbox had shared data with researchers related to research projects at 1,000 universities without their permission. Although the information was anonymized so individual information couldn't be determined, because such "project-folder related data" can oftentimes contain sensitive material it is a worrisome development -- Dropbox says that by agreeing to use its site you are agreeing to have your data shared with others, albeit anonymously.

Considering the ongoing concerns people have with regular privacy invasions and personal data breaches by Facebook, businesses are becoming more circumspect about how they release all that information they've collected from users. Dropbox doesn't seem to share those concerns.

That raises questions about whether analyst projections of user growth are realistic. Enterprise-focused cloud storage provider Box (BOX -3.67%) is seeing slower billings growth, for example, though management said it remains "committed to surpassing a $1 billion in revenue for the full year of fiscal 2022."

Dropbox views Box as a competitor only on a limited basis in the enterprise market, and sees itself closer to the cloud collaboration services offered by Atlassian (TEAM -7.61%), but that might be because its efforts at breaking into the enterprise market have been greeted with skepticism since the company started as a consumer-oriented business. Making the transition to the commercial side isn't easy.

That could call into question just how much it can expand; and though stock selling may have played a role in limiting its upside this year, future growth could be hampered unless it proves the naysayers wrong. That may be a target it won't be hitting anytime soon.