Is this stock finally bottoming after a rough year?

When a company delivers bad news but the stock doesn't go down, it could be a sign of a bottom (though not a guarantee). This may be the case with Applied Materials (AMAT -2.67%), the largest semiconductor equipment manufacturer in the world.

Applied released its fiscal fourth-quarter earnings report in mid-November, beating analysts' revenue expectations and meeting their expectations for earnings per share. The company guided for Q1 revenue that was lower than what analysts were expecting, but the stock rose in trading the next day.

Applied's stock, like the entire semiconductor sector, has had a bruising 2018. Its price-to-earnings ratio has fallen from 23 to 10, and its dividend yield has increased to 2.26% as the stock price has dropped by about 30% year to date as of this writing. 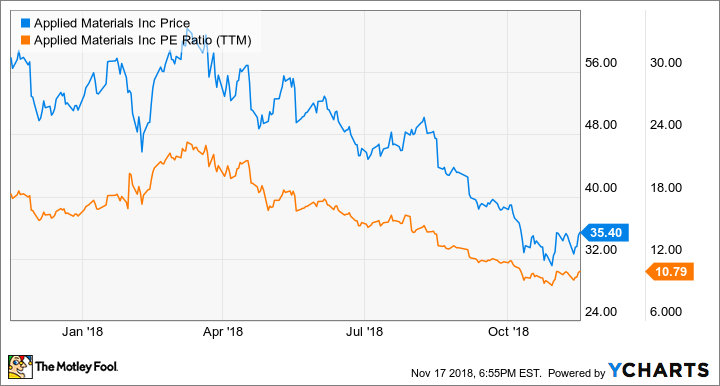 Is Applied a bargain, or are there more tough times ahead?

The Jinhua equipment ban hurt Applied more than others

The main reason for the guidance miss is Applied's relatively large exposure to Chinese firm Fujian Jinhua Integrated Circuit Co., Ltd. Fujian is on the receiving end of an equipment ban from the U.S. Commerce and Justice Departments issued in early November. The ban -- preventing sales to the company -- is retaliation for the alleged theft of trade secrets from U.S. technology companies.

... a quarter ago were expecting our semi business to be flat to up sequentially. We guided down a bit. In the absence of this export restriction, we would've been up sequentially in our semi systems business into Q1. I would say that our revenue with that one customer in Q1 is a meaningful number.

The memory, semiconductor, and equipment space has experienced a historic boom over the past two years. However, a near-term slowdown in spending, exacerbated by an escalating trade war, has caused spending on memory and semiconductors to decelerate. Still, with many stocks down 40%, 50%, or even 60% from their highs, the question is if the pessimism is overdone.

... 2019 feels more like 2017 than it does 2018. If I look at where we sit today in 2018 WFE [Wafer Fab Equipment], all-time high in terms of aggregate spend, and strength across each of the four device types. As I profile off of that view into '19, we would expect memory to be down and foundry logic to be up.

In other words, just because 2019 might be a bit lighter than 2018, Durn reminds investors that 2018 was an all-time record, and that industry dynamics are strong. Management says it sees a "U-shaped recovery" rather than a "V-shaped" recovery, but it does see a recovery. Durn said that he would be "extremely disappointed" if the industry sold only $50 billion of equipment in 2025. The industry's current run rate is in the mid-$40 billion range.

Finally, perhaps the biggest concept to understand about the semiconductor industry is the end of Moore's Law, which is the idea that computing power roughly doubles every two years, by virtue of being able to pack twice as many transistors onto a chip. Moore's Law had proved very accurate over the history of the technology industry ever since Gordon Moore coined the concept in 1965.

Dickerson is making the case that if the industry wants to make more and more powerful chips, it will need new processes and new innovations from companies like Applied. If you agree, Applied could be a great long-term buy. Given that Applied's R&D budget is much bigger than those of its rivals, Applied looks like a good bet to play the recovery of the sector.

Billy Duberstein has the following options: short April 2019 $33 puts on Applied Materials, short December 2018 $87.50 puts on KLA-Tencor, and short February 2019 $125 puts on Lam Research. The Motley Fool recommends Lam Research. His clients may own shares of some of the companies mentioned. The Motley Fool has a disclosure policy.

A Soft Landing May Be Coming: 3 Semiconductor Stocks That Could Soar

Why Applied Materials Fell 9.4% on Thursday