The first reported quarter as a public entity for Yeti (NYSE:YETI), a premium cooler and consumer lifestyle products manufacturer, received a chilly reception from investors. The company's third-quarter 2018 report on Nov. 29 revealed a year-over-year improvement in diluted earnings per share (EPS) of 5% to $0.21. Yet a mere 7% top-line increase, to $196.1 million, surprised investors, sending the YETI symbol into a 16% skid in the trading session following the release. Yeti's stock has subsequently recovered only about 4 percentage points as of this writing.

The company attributed the softer revenue in coolers and equipment to a prior-year disposition of excess inventory tied to end-of-life cooler products. Conversely, drinkware products, the company's other major business line, saw sales surge 37%, to $104 million.

The fortunes of these two major revenue streams were reflected in the company's breakdown of revenue by channel. Yeti's wholesale channel reported flat revenue against the prior year of $125 million, as drinkware gains were offset by the weaker cooler and equipment sales. 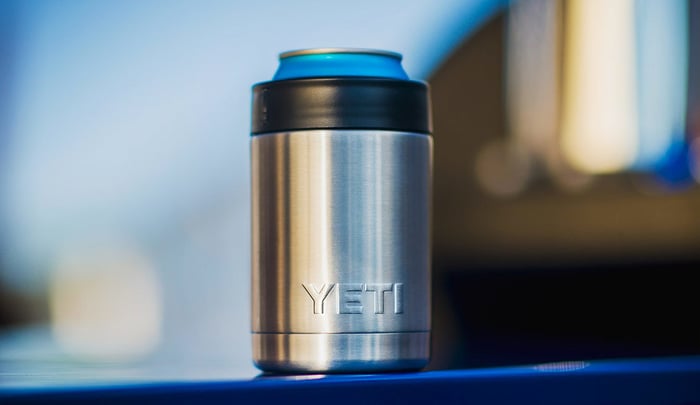 The relative ascendancy of drinkware in Yeti's product mix isn't a one-quarter phenomenon. In the first nine months of 2018, cooler and equipment sales have improved by only 5% versus 2017 to $240 million, while drinkware has realized 44% year-over-year expansion to nearly $281 million.

During the company's third-quarter earnings conference call, CFO Paul Carbone confirmed that even after removing the effects of the excess inventory purge in the third quarter of 2017, cooler sales were comparatively soft this quarter. The company expects coolers to rebound in the coming quarters due to new model launches.

What's driving drinkware gains against Yeti's iconic premium coolers, which cost from $199 to $1,299 and are prized for their ruggedness and durability by hunting and fishing aficionados?

While our early adopters are in the hunting and fishing communities, we've become a go-to brand for both  enthusiasts and casual campers, beachgoers, backyard barbecues, tailgaters, daily commuters, and many more. Further illustrating our broadening appeal, the percent of our female customers has grown from 9% in 2015 to 34% in 2018.

The shift in customer type coincides with a push into nontraditional markets where Yeti is getting more than half its new business. The new regions in which the company seeks to stimulate demand are outside its "heritage markets," which are primarily Southern states steeped in hunting and fishing culture. The following map from the company's IPO prospectus gives you an idea of how Yeti's old and new markets are demarcated: 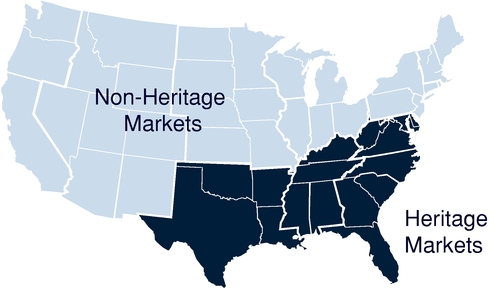 As Yeti increasingly enters urban regions, it can expect vibrant demand for coolers. Still, it's likely that Yeti's brand appeal may translate into higher demand for drinkware versus equipment. City dwellers who visit wilderness areas infrequently may not be able to justify an investment of hundreds of dollars in a premium cooler. However, these same consumers may appreciate a high-end, double-walled stainless steel drinkware product for the morning commute.

As Carbone noted during the earnings call, Yeti's long-term plan calls for annual revenue growth of 10% to 15%, and he emphasized that the company "doesn't need [single product] home runs" to hit this target.

It doesn't need its most expensive products to outstrip other categories in sales to reach the desired revenue range, either. At the moment, shareholders are concerned over the sputtering of cooler revenue. But they may be ignoring a strengthening revenue stream that is receiving a warm reception both inside and outside core heritage markets.