Amid Apple's (AAPL 3.08%) ongoing services push, every opportunity for incremental growth is worth pursuing. Apple Music is among the most important pillars of the company's services strategy, and the Mac maker now has 56 million subscribers (including free trials), according to a recent report from the Financial Times. But those are all consumers using the service for personal use.

Apple wants to bring Apple Music to businesses next. 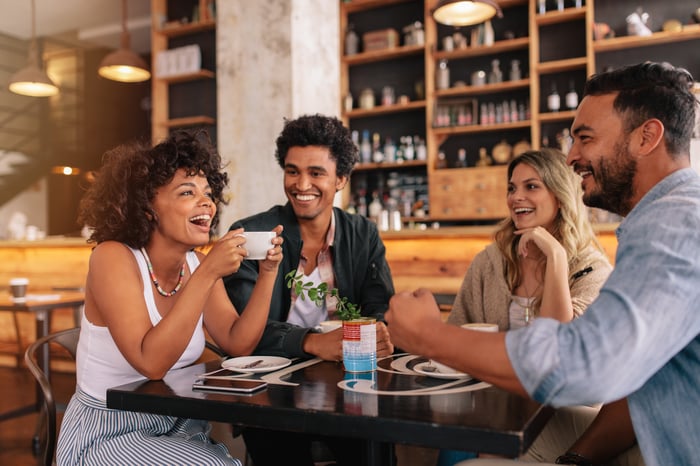 That background music has to come from somewhere. Image source: Getty Images.

A natural evolution of Apple Music

Music Business Worldwide reports that Apple has now filed a trademark for Apple Music for Business in the U.S. as well as in a couple international markets. While music streaming doesn't typically come to mind when thinking about enterprise subscription services, we're talking about companies looking to legally license background music to play in retail locations like coffee shops or other public spaces. Personal subscriptions for music-streaming services do not cover commercial use.

There aren't a whole lot of details quite yet about what Apple Music for Business will look like in terms of features or pricing, but dominant paid music-streaming service Spotify (SPOT -1.01%) has offered a similar plan for years, underscoring precisely why Apple feels compelled to expand into the business-to-business (B2B) segment of the music-streaming market. Additionally, Apple has long viewed itself as a champion for stronger monetization for the music industry, and MBW points to a recent study that estimates artists miss out on $2.65 billion in annual royalties due to small businesses using personal accounts.

Speaking of Spotify, that study was actually commissioned by Soundtrack Your Brand, the third-party B2B provider that Spotify sells its business plan through. Soundtrack Your Brand was started in 2014 by a former Spotify exec and Beats (incidentally now owned by Apple) co-founder Ole Sars, and also counts Spotify as a financial backer. The study also notes that over 70% of U.S. business owners believe personal plans can be used for commercial purposes, suggesting the problem could also be attributable to a lack of awareness.

There's considerable upside here as well. Not only is it an entirely different segment of the market for Apple to tap, Soundtrack Your Brand plans are regularly priced at $27 per month -- roughly five times the $5.37 average revenue per user (ARPU) that Spotify brought in for premium subscriptions in the third quarter on the consumer side. The business plans include other features like scheduling, customized soundtracks, and explicit lyrics filters ("This is a family establishment!"), among others. Even if royalty costs for business plans are higher since retail locations play music all day long (more than the average consumer streams), these are likely still more profitable.

With said study estimating that there are 21.3 million businesses worldwide that are still using consumer plans, there could be quite a few business customers to sell to, particularly if they're informed that they can't just use their personal accounts.