With a nearly 60% share of its domestic internet search market, it's no surprise that Yandex (NASDAQ:YNDX) is often called the "Google of Russia." And that became an even more apt comparison on Wednesday when -- in a move that echoes Google with its popular Pixel 3 devices -- Yandex introduced its first smartphone, dubbed Yandex.Phone.

Here's what investors need to know about Yandex's foray into the smartphone space. 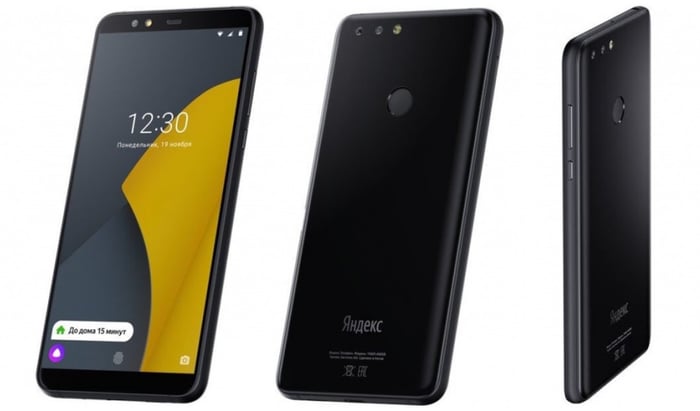 Yandex.Phone will cost 17,990 rubles (or roughly $270), and initially be available on Thursday, Dec. 6, at the Yandex Store at company headquarters in Moscow. The launch will then expand on Friday to Yandex's new Beru e-commerce marketplace, Russia's Beeline telecommunications provider, and electronics retailers in the country.

As for hardware, the Android 8.1 device will feature a Snapdragon 630 processor (Qualcomm's midrange 8-core SoC), a 5.65-inch HD display with 2160x1080 resolution, a fingerprint sensor, NFC tech for contactless payments, and dual 12MP/5MP cameras on the rear with a 5MP front camera. In short, there's nothing mind-blowing here -- nor should there be, given Yandex.Phone's midlevel price point.

What's more important is that it will be the first smartphone to come with a suite of Yandex's own mobile services pre-installed. It will also be the first to be fully powered by Alice, the company's Alexa-esque AI assistant catering to the Russian market. Yandex says it has integrated Alice across the majority of apps and services in Yandex.Phone to enable users to interact with the service regardless of what they're doing on the phone. For example, they could add an event to their calendar, call a taxi, or order food while watching a movie.

"Yandex.Phone is built to offer Russian users a smartphone equipped with all the localized tools needed for users to navigate their daily routines," said Fedor Yezhov, Yandex's vice president for ecosystem products. "Users can interact with Alice and the most widely used Yandex applications in a new way on this phone."

To further sweeten the deal, the phone comes with a six-month subscription to Yandex.Plus, which includes unlimited access to Yandex.Music and discounts on its Yandex.Drive and Yandex.Taxi services. Buyers will also receive small ruble credits for Yandex.Taxi and to their Yandex.Money e-wallet service, as well as 10% cash back on purchases made with Yandex.Money for three months.

It might seem strange that Yandex is entering the crowded smartphone market considering that global smartphone sales have effectively stalled in recent quarters. But that's not the case in Russia, where -- according to research from Counterpoint Market Pulse -- smartphone sales climbed 25% year over year in the second quarter of 2018.

Counterpoint analyst Anshika Jain says this growth is coming not only from higher unit sales, but also from higher average selling prices as users shift from devices classified as entry level (i.e. $99 and below) to midtier ($100 to $199). Sales within the latter segment soared 80% year over year in the second quarter to comprise nearly 40% of the overall market.

But foreign brands still command the vast majority of smartphone unit sales in Russia. At the end of the first half, Samsung had grabbed 30% of the market, followed by China's Huawei at 29%, Apple at 10%, and China's Xiaomi at 8%. Meanwhile, Counterpoint says that Russian manufacturers have largely focused on entry-level devices due to "better offerings from competitors in the upper-price bands..."

It remains to be seen whether Yandex will succeed with Yandex.Phone, an obvious effort to take back some of that market share by selling Russian smartphone users their very own "better offering" in the mid- to high-tier price range.