Although the possibilities for Sears Holdings (NASDAQ:SHLDQ) include a liquidation that would see the once-venerable department store chain finally shut its doors, Chairman Eddie Lampert is reportedly angling to buy some 500 stores in partnership with Cyrus Capital Partners to keep the business alive.

As much as Lampert has said over the years that he believes in the retailer's future, and he has loaned it billions of dollars to keep it going, this still looks more like an attempt to protect his financial dealings, and those of other lenders, than any confidence in Sears and Kmart as viable businesses. 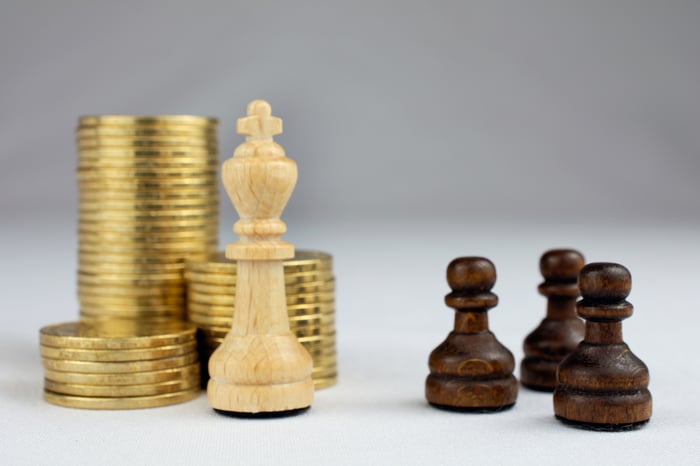 A hedge fund salvage effort, not a retail rescue

According to Bloomberg, Lampert and Cyrus are attempting to find a way to keep Sears afloat with what's known as a credit bid, by swapping the debt they hold in the company for an ownership stake in 505 stores, a deal that would presumably allow Sears to emerge from bankruptcy protection if approved by the court.

Unsecured creditors previously balked at Lampert's attempt to acquire the company, calling it "unjustified and foolhardy," and Cyrus stopped Sears from selling notes to debt traders to raise cash by buying the notes itself.

Cyrus has made side bets on Sears' future using derivatives, selling credit default swaps that insured against Sears defaulting. Had Sears sold the notes to others, its bet would have been devalued and the amount it had to pay out might have risen as others traded on them. Instead Cyrus reportedly paid Sears $82.5 million to prevent others owning them.

Cyrus then provided Sears with $350 million in financing it needed to stay open, literally negotiating a deal in the bankruptcy court's hallways on superior terms that elbowed out of the way Great American Capital Partners, which had been previously agreed upon as the junior debtor-in-possession lender.

Some believe that because Cyrus has so much exposure to Sears through its use of derivatives that it is attempting to extract as much value as possible out of it, perhaps even profiting in the end regardless of whether Sears survives or not.

Even if Lampert and Cyrus are successful in gaining court approval to gain control of the company, Sears' ability to remain viable seems doubtful. Customers have fled its stores, leading to dramatically lower sales. A smaller footprint might help, but it won't give customers confidence in making a big purchase from the retailer.

For example, hardlines like appliances and consumer electronics account for most of Sears' revenues, some 59% in the quarter before it sought bankruptcy protection. Warranty and repairs are key components in a consumer's decision to make a big purchase, and doubts about whether Sears will still be around will likely drive more shoppers to other stores to buy their white goods.

Similarly, keeping vendors stocking Sears shelves will be difficult, as they will be worried about getting paid. Those that do decide to continue doing business with the company will likely want immediate payment on delivery, putting additional pressure on Sears' finances. It lost vendors before the bankruptcy filing and probably scared away many more from supplying it afterward.

Lastly, the retail landscape isn't getting any friendlier for Sears. Amazon.com continues drawing in millions of customers online while Walmart lures them both offline and online.

There's no value proposition left in Sears to make it a destination for consumers. If it emerges from bankruptcy protection, it's not as though it will be in fighting form to take on all comers. It will still be a badly damaged brand whose leadership has shown a propensity for squeezing every last ounce of value out of it, and the financial gamesmanship going on during the bankruptcy process doesn't instill confidence things will change.